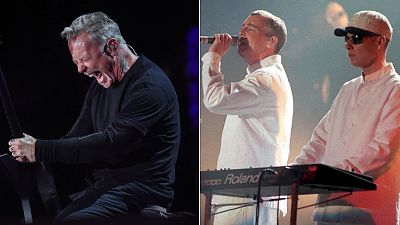 The world has finally got its hands on the second half of season 4 of Netflix’s hit show ‘Stranger Things’.

But whether the monsters of the 'Upside Down' or the plucky gang from Hawkins triumph in the end, the show already has an unexpected winner: 1980s musicians.

In this latest season, Kate Bush’s classic hit ‘Running Up That Hill’ got the ‘Stranger Things treatment', with the track re-entering the UK charts and eventually making number 1, 37 years after its release.

The final two episodes also featured another extended musical scene, with character Eddie playing along to Metallica's 'Master of Puppets', causing the song to re-enter the rankings of Spotify's most listened songs.

"We were all stoked to see the final result and when we did we were totally blown away," Metallica wrote in an Instagram post about the feature.

But is ‘Stranger Things’ an outlier in revamping nostalgic tracks for a new audience?

Over the years, period pieces and cast covers have brought treasured originals back into the public consciousness, allowing artists to benefit from a listening landscape revolutionised by streaming and social media.

Let’s take a look at some of the old-school bangers that have made it back into the charts in an age of prestige TV.

2009 was a different time, before COVID, before Netflix was internationally known, and when Twitter had roughly a fifth of the users it has now. In those hazy days, Ryan Murphy wrote the pilot for a show about a plucky group of outcast musical theatre enthusiasts who were members of a Glee Club.

To finish off the pilot episode viewers watched Rachel, Kurt, Mercedes and the gang as they sang a rendition of Journey's ‘Don’t Stop Believin' to a nearly empty auditorium.

'Dont Stop Believin' had already made a comeback into the US charts a few years earlier, in 2005, after an appearance on the reality TV show ‘Laguna Beach.’ Now, following its starring role in Glee, it was back again.

The ‘Glee’ cover version was propelled to no. 4 in the US Charts (four places higher than Journey’s version) and every ‘Glee’ fan has been humming it ever since.

In the depths of a deep winter lockdown who would have thought that a drama about the HIV/AIDS epidemic would capture UK audiences?

‘It’s a Sin’ was written by queer television creator and ‘Doctor Who’ revamper Russell T Davies and told the story of a ragtag band of gay men (and one woman) as they navigated one of the worst periods in queer history.

As audiences shed tears over a lost generation, the show’s titular song (originally released by the Pet Shop Boys in 1987) entered the playlists of UK audiences in a manner not seen for 40 years.

Streams of ‘It’s a Sin’ in the UK went up 249% in the wake of the show, according to the Official Charts company.

A cover was also released by Elton John and Years & Years (whose lead singer Olly Alexander starred in the show) reached the top spot in the UK charts.

Beloved Canadian sitcom ‘Schitt’s Creek’ told the story of a down-on-their-luck wealthy family pitching up in a small Ontario town.

In the later seasons a central romance blossomed between highly-strung son David and his business-partner-cum-newly-out-boyfriend Patrick, played by Patrick Reid.

In one memorable scene David’s eccentric mother Moira watches on as her son is serenaded by his partner singing a cover of Tina Turner’s ‘Simply the Best’ in the general store they own together.

With not a dry eye in the house, Reid’s cover shot to #1 on iTunes Canada Soundtrack Chart. Not bad for a small town boy.

The alcoholism, workplace harassment and sharp suits of ‘Mad Men’ all made viewers nostalgic (or not) for the 1950s, but it was in its 1960s era that the show made its most iconic references.

Joan’s beehive loosened up, Roger Sterling’s daughter ran away to a commune, and in one memorable moment Don Draper’s young, would-be actress wife told him to listen to the Beatles.

‘Tomorrow Never Knows,’ the sitar-infused record that Don drops the stylus onto, brought back memories for Beatles fans everywhere, and brought a new music genre to the fore for millennial viewers.

‘Mad Men’ studio Lionsgate reportedly paid €233,000 to play the track, a coup for Apple Corps and other beneficiaries of the Beatles’ back catalogue.