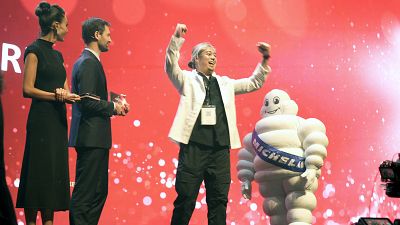 The Michelin Guide is to the culinary world what the Oscars are to show business. History was made when the Middle East's first-ever Michelin guide was revealed in Dubai.

Chefs from the winning restaurants joined Michelin's International Director Gwendal Poullennec on stage at Dubai Opera and received a standing ovation from an audience of their peers.

Originally conceived in France in 1889 to encourage motorists to drive more often, the little red guidebook tempted people to take to the road to visit restaurants. Tyre company owners Andre and Edouard Michelin added the star rating in the 1930s.

Stars are awarded based on multiple reviews by anonymous Michelin inspectors who take into account the quality of the ingredients, the harmony of flavours, the mastery of techniques, the personality of the chef as expressed in their cuisine and consistency both over time and across the menu.

Michelin inspectors rate more than 30,000 establishments in over 30 territories across three continents. With more than 30 million Michelin Guides sold to date, it's one of the most trusted culinary guides in the world.

When in Dubai, here are the star-winning restaurants to visit:

11 Woodfire, Jumeirah: Chef-owner Akmal Anuar uses an array of woods to create his smoked and woodfired dishes. Steak, fish and vegetables are on the menu. Expect creations such as pine-smoked Scottish salmon with caviar sauce and citrus cream.

Hakkasan, Atlantis, The Palm: One of 10 Hakkasan restaurants around the world, the Dubai branch is in the family-friendly Atlantis, The Palm hotel. Known for its creative dim sum, the platter features kaffir lime lobster har gau, abalone and chicken shui mai with caviar, and sea urchin and spring onion dumplings.

Höseki, Bulgari Dubai: Sixth-generation sushi master Masahiro Sugiyama serves his menus omakase-style, meaning he decides on all the dishes based on the best fish available each day, which he has imported directly from Tokyo's finest fish markets.

Tasca by José Avillez, Mandarin Oriental Jumeira Dubai: Tasca is the Portuguese word for tavern and José Avillez is arguably Portugal's most famous chef. Dishes from his acclaimed Lisbon restaurants, which include Michelin-starred Belcanto, appear on Tasca's menu, among them the deliciously creamy avocado tempura.

The Michelin guide: making top chefs reach for the stars