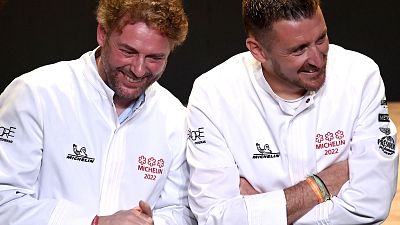 French chefs Arnaud Donckele (L) and Dimitri Droisneau (R) celebrate after being awarded a third Michelin star during the 2022 edition of the Michelin guide   -   Copyright  PHILIPPE LOPEZ/AFP
By Jez Fielder  with AFP  •  Updated: 25/03/2022

Chefs Arnaud Donckele in Paris and Dimitri Droisneau in Cassis (Côte d'Azur, south-eastern France) have been awarded three stars in France by the Michelin guide, the supreme award in the world of gastronomy, the organisers announced on Tuesday during a ceremony in Cognac.

On the 2022 list, which is something of a reunion after two years of the health crisis, they joined the very closed club of three-starred establishments which now has 31 tables in France (compared to 30 last year).

Already possessing three Michelin stars for his restaurant in Saint-Tropez, his Parisian restaurant, Plénitude at the Cheval blanc, goes directly from zero to three stars after opening last September.

"When I arrived in Paris, it was with a lot of humility because there are only great chefs in Paris. I didn't think we would get there so quickly," he said, visibly moved.

He had been distinguished cook of the year 2020 by the Gault et Millau guide.

The other distinguished chef is Dimitri Droisneau who officiates at Villa Madie in Cassis. Less well known than Arnaud Donckele, his restaurant, overlooking the Mediterranean, gives pride of place to aromatic cuisine.

"We took this house nine years ago. We had a baby, we have a second one now. We live in the villa. We work in a paradise. We work with honesty and humility", he said.

As in the 2021 vintage, no three-star chef has been downgraded.

The ceremony also awarded several established chefs with a star for their new establishments: Hélène Darroze at Villa La Coste, Mauro Colagreco in Roquebrune-Cap-Martin, Anne-Sophie Pic in Megève or Philippe Etchebest in Bordeaux.

In total, 41 new addresses are awarded their first star, compared to 54 last year and six new restaurants, or 87 in total, are distinguished with a "green" star, introduced in 2020, for their eco-responsible approach.