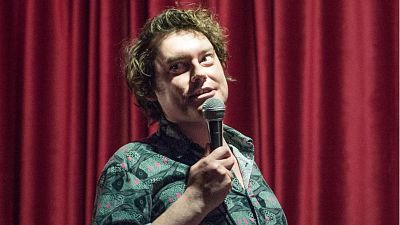 Chris Davis was at the top of his game as a bartender in a Michelin-starred restaurant in Berlin when he decided to try his hand at comedy.

After mining his high-end hospitality experience for his old routine, Davis is now back to his roots, riffing on his upbringing on the outskirts of Glasgow.

Ahead of his Edinburgh Fringe show 'Death of a Barman', Davis chatted to Euronews about his journey through the drinks and comedy industries.

Life as a Michelin-starred bartender

Davis first started bartending when he moved to Berlin 14 years ago. Feeling like he’d spent his entire life in education, he was ready for a break.

“I started off at just normal bars, serving pints and making long drinks,” he says. “But then I started to get a taste for making cocktails and I was moving from bar to bar every year or so. Eventually, I was going from high end restaurant to high end restaurant, and finally to one with a Michelin star.”

When Michelin-starred restaurants are spoken about, usually the focus is on the extreme dedication to creating incredible food. Often, people overlook the work that goes into the drinks they serve, which have to be of just as high a standard.

“That’s where the expertise comes from. It’s where the aesthetics come from. There’s no room for error,” Davis says.

It was an environment where Davis could be constantly learning and growing his craft.

The bar worked like a well-oiled machine. Four people would be working in the bar at any time, the bar manager, two bartenders and a barback - the person who keeps the bartenders stocked with drinks and garnishes.

“The barback was the spine of the operation. I wouldn’t have to ever leave my station. Anytime the mint was running low, you would turn around to pick up a shaker and the mint would just be refreshed already.”

While it was mostly smooth running, the environment was still a good source of comedy inspiration.

With such a regimented environment, there’s not much room for bantering with some of the more uptight customers, Davis explains. On one occasion, a woman asked him where a fish dish originated from.

“With total conviction, I just said ‘the sea’,” Davis recalls. He received a disciplinary.

The strict environment didn’t stop Davis from getting away with some of his more salubrious exploits.

“I was so hungover one time, I puked behind the bar,” he says. “Very, very subtly. But obviously that’s a no go in that environment.”

Davis’s no-holds barred personality and growing list of bartending anecdotes meant a sideline in comedy naturally fit into his lifestyle. For a long time, comedy was the hobby to his bartending career. But bartending couldn’t sustain him forever.

“I got to 33 and those 12-hour shifts just started to kill me,” he says. “I was starting to get grumpy behind the bar.”

His colleagues eventually asked him what was wrong and Davis blurted out; “I just don’t think I can honestly do this anymore.”

Not content to pack up his cocktail shakers permanently, Davis instead incorporated it into a comedy routine. 'The Wandering Barman' was born.

In his 'Wandering Barman' shows, Davis would teach an audience how to shake and make the high quality cocktails that he’d perfected in his bartending career, while laughing at his restaurant anecdotes.

Participants were able to learn anything from a basic Negroni to one of Davis’s signature drinks, a flipped cocktail that combines a masala-infused rum and an egg yolk.

“It was about showing people that you can do these cocktails at home, but helping them understand the different spirits, let them see how syrups are made and a basic understanding of how to balance citrus and sweetness.”

Davis toured the show across Europe, and noticed funny differences in the ways different nations responded to his routine.

“The Spanish audiences are the most talkative. They want to interact with you. The Germans can sometimes stifle their laughter a lot. They won’t laugh out loud but will tell you how good the show was afterwards. I was always like ‘where were you 20 minutes ago!’,” he jokes.

Davis was bringing in good money for his ticketed events. It seemed to be a straightforward future for him in comedy. Then the pandemic hit.

Finding the comedian behind the bartender

Although he managed to stay afloat with online gigs, something no longer felt right about 'The Wandering Barman' routine.

For now, Davis continues to perform 'The Wandering Barman' for corporate events. But his focus has shifted entirely to a more stripped-back version of comedy as he realised the lifestyle he was living clashed with his sense of self.

“I come from a place called Cumbernauld, which is in the outskirts of Glasgow. It was voted the worst town in the UK. So I come from this rough-and-ready area, and I’m very proud of that,” Davis says.

“But I found myself climbing this middle-class social ladder in Berlin, making cocktails and refining my palate and all that. Eventually I came to a realisation that that’s not me.”

Feeling like an outsider in the world of Michelin star cocktail making, Davis poured his energy into a new show, 'The Death of a Barman'.

“I got sucked into the fake side of that bartending world for a bit,” Davis reflects. “And in Scotland, you know they’d call me dry shite, no craic, and no banter, for that.”

“It sometimes seems like a tragedy. I’m sad, I’m disillusioned. But you have to have that. Tragedy plus time equals comedy, so once you’ve got that distance on it, you can get a better perspective on it and then it becomes funny,” he says.

One of the key parts of Davis’ act are his observations on class.

“I always exaggerate in my head what middle class people do. Like they’re eating Ferrero Rochers on a regular basis while working class people only get them at New Year’s Eve.”

“Or how they’re always giving advice, asking you if you’ve ever thought about investing. You never get that the other way around, with a working class person showing someone at Waitrose how to jam the coin slot for a trolley with their key.”

Through writing the show, Davis found he was able to harmonise his working class roots with the tastes he’d gained as a fancy bartender in Berlin. He could still be the boy from Cumbernauld and he could enjoy a perfectly stirred martini.

“It’s this cyclical kind of thing to realise it doesn’t matter who you are in the world. Everyone gets to experience whatever they want,” he says.

Reflecting on the validation he has sought out from his previous attempts at fitting in with the middle classes and the validation from an audience laughing, Davis has been able to remove his ego from the equation.

“The service industry is about making strangers have a good time. And that’s also what I do. But with stand up, I’ve got a room full of people that I don't know and they don’t know me personally.”

The ultimate test is yet to come as Davis prepares his show for a month-long tour in his home country at the Edinburgh Fringe Festival.

Chris Davis will tour his show "Death of a Barman" in Berlin this June ahead of a month-long residency at the Edinburgh Fringe in August. You can find his tour dates here.