L’Assiette Champenoise, a family-run restaurant in the north-western French town of Tinqueux, is the newest member of France’s highly exclusive culinary club of establishments with three Michelin stars.

Michelin unveiled its 2014 edition of the Guide Michelin France on Friday, listing the country’s new culinary winners and losers.

L’Assiette Champenoise ’s 39-year-old proprietor, Arnaud Lallement was the only French chef to receive the coveted three-star rating this year. With that, his restaurant became one of only 27 in the country to hold the much coveted top rating. Michelin’s judges hailed Lallement’s cooking as modern and creative and rejoiced at the “noble” ingredients of his sauces. 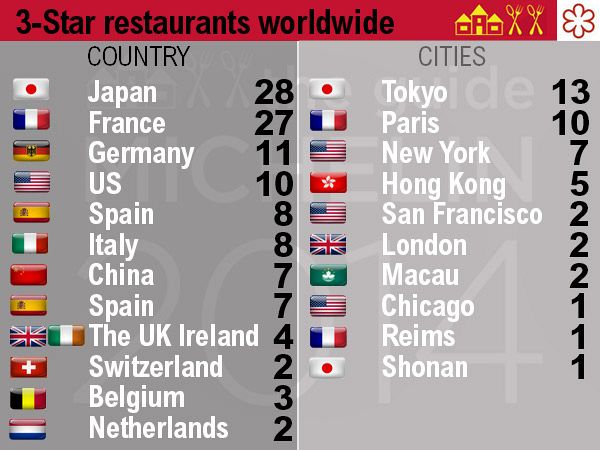 The French Michelin guide has the power to ‘make or break’ a restaurant – and even shatter the soul of chefs: once a multimillion-dollar culinary emperor, Chef Bernard Loiseau shot himself in the mouth with a hunting rifle after his restaurant was demoted from three-stars to two in 2003.

Loiseau’s suicide shook the culinary world. The 52-year old chef was indeed a world-renowned celebrity. He was the author of eight cookbooks and the ‘international ambassador’ for Perrier-Jouët champagne.

But despite some controversy in culinary circles, the annual red guide is still regarded as a canon of culinary excellence – a gastronomical bible.

But this Bible does not tell chefs the ingredients they need to get their stars, says Florent Boivin, head chef and culinary teacher at the Institut Paul Bocuse near Lyon, France. “What a chef has to tell himself is that the first thing is the quality of the produce,” said Boivin. “Then there is the culinary creativity, which is very important, and there is the culinary identity of the cook and of the restaurant and the terroir“.

L’Institut Paul Bocuse, a culinary, catering, hotel and restaurant management school, was established in 1990 by world-renowned three-starred French chef Paul Bocuse and hosts, in this year’s intake, students from 37 nationalities hungry to achieve excellence in the kitchen.

But how can you become a member of this elitist Michelin star society?

Every year, the guide’s secret inspectors travel the world visiting restaurants and hotels, paying for their own meals – just like ordinary customers. If they identify a particularly high-quality establishment, they will make multiple visits and try different meals to analyze the consistency of the restaurant’s offerings, the flavours, the cooking, the value for the money, and the personality of the chef through his cuisine and service.

* One star indicates a very good restaurant in its category, offering cuisine prepared to a consistently high standard. A good place to stop on your journey.

The anonymous inspectors look for nothing less than perfection in a restaurant vying for three stars. If a dish emerges from the kitchen with just a little too much pepper, a restaurant will be demoted. Michelin’s critics claim the guide has lost its way, especially with the increasing number of less-experienced young chefs receiving stars.

But the guide has retained its reputation – and its stars their luster – in the eyes of the restaurant-going public. L’Assiette Champenoise will soon be reaping the benefits of its prized third étoile.