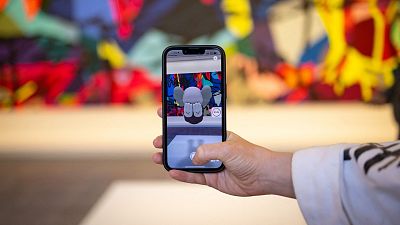 Merging the physical and the virtual, new sculptures are greeting visitors of the Serpentine Galleries in London – but you'll need your smartphone to see them.

This is the new exhibition of American contemporary artist KAWS, called 'New Fiction'.

Once visitors download an app, they can see nine additional Augmented Reality (AR) artworks on their screens - both inside and outside the gallery.

A new artistic medium that stimulates and escapes

Augmented reality is an enhanced version of the real physical world that is achieved through the use of digital visual elements, sound, or other sensory stimuli delivered via technology.

For KAWS, born Brian Donnelly, this new artistic medium was a way to escape the reality of the pandemic for the past two years.

He started his career in the 1990s and initially created 2D artworks, before turning to the 3D character sculptures that made him famous.

Is art entering a third phase?

The artist is no longer tied to gravity, scales, and can pick wherever he wants his works to appear.

"The idea of going to a city and geotagging. You can put 10 monumental sculptures around and have an exhibition where people can come to view. And you can't do that with physical all the time. You can, but the logistics are impossible. So I think artists are going to find that as a very useful device to sort of create work and put it into the world," says Donnelly.

KAWS believes it will be art becoming more digital will be a natural progression.

"I think as we move forward, things are just going to become more agnostic and you're going to just see the sort of dialogue happening digitally and real. So I think this is just a starting point. I don't know if it's a third phase, it's more of just an evolution," says Donnelly.

KAWS worked with Acute Art, a digital art studio that made the exhibition technologically possible.

With the new trend of the metaverse, a parallel digital world, Daniel Birnbaum, the director of Acute Art, wants to ensure that art is represented in all realities - without giving more importance to one or the other.

The exhibition can also be visited through the video game Fortnite, where a 3D replica of the gallery and the artworks were added.

It's the first time that an artist has had one of his exhibitions recreated in such a way — and available to view by the 80.4 million monthly active users of a video game, according to Eurogamer.

Check out the video above for a look at the exhibition.

Why you need to watch Eurovision, according to the superfans

Visit museums at night on European Night of Museums - May 14