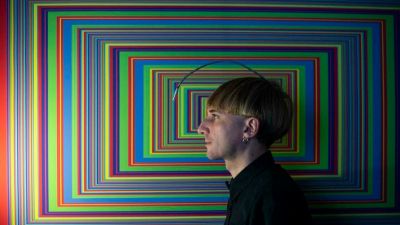 Neil Harbisson was colour blind until an antenna that allowed him to hear colours was attached to his skull   -   Copyright  AFP
By Theo Farrant  & AFP  •  Updated: 25/12/2021

For Neil Harbisson, a self-described "cyborg" artist living near Barcelona, colour is quite literally music to his ears thanks to an antenna he designed to overcome colour blindness.

Well-known in Spain and with an international following that enabled him to meet the likes of Leonardo di Caprio and Tom Cruise, Harbisson is now testing out a new device designed to feel physically the passing of time.

Where once the term cyborg conjured up images of Arnold Schwarzenegger's Terminator, technology today is expanding human capacities through prostheses and implants.

Perceiving things beyond the capability of a regular human

Born in Northern Ireland with achromatopsia, a rare condition meaning he can only see in greyscale, Harbisson moved to Barcelona as a child and grew up obsessed with colour and things he couldn't sense.

It was an obsession that saw the now 39-year-old eventually go under the surgeon's knife to transform his identity and his life.

While at music college in England, he developed the slim metal rod that arches over his head and vibrates according to colours it detects.

In 2004, he managed to persuade a surgeon – who remains anonymous – to drill it into his skull, the technology becoming part of his body as the bone grew around it.

The sensor picks up the frequency of colours and translates them into sounds that he perceives through bone conduction.

Humans normally hear using air conduction with sound waves passing through the outer and middle ears and causing the inner eardrum to vibrate.

But with bone conduction, the vibrations are transmitted through the skull or jawbone directly to the inner ear.

Music brought to life in colour

The colour-sound association also means he senses colours when listening to music or even speeches, with every syllable having a frequency that relates to colour.

After all, bone conduction helped Beethoven as he started going deaf.

"At the beginning, everything was chaotic because the antenna was not telling me: blue, yellow, pink, it was giving me vibrations and I had no idea what colour I had in front of me," Harbisson said.

"But after some time, my brain got used to it and it slowly became part of my perception and became normal," he added.

Although it cannot be switched off, Harbisson's antenna falls silent in darkness.

His 'eureka moment' came after dreaming 'in colour' and realising the colours "had been created by my brain and not by the chip".

The German composer realised he could still hear by resting a wooden stick on the piano while biting the other end as he played.

In the home where Harbisson grew up and where his mother still lives, a riot of coloured canvases line the walls, the staircase lined with curious-looking 'facial scores' of celebrities like di Caprio and Cruise.

These Hollywood stars let Harbisson detect the 'sound' of their skin tone and lip colour, which are rendered in enigmatic charcoal lines.

The future of cyborgs

Harbisson is now turning his attention to a new project.

He's created a device shaped like a chunky metal collar, designed to sense the passing of time, and is kicking off a year-long trial to see how it works.

"There's a point of heat that takes 24 hours to go around my neck and allows you to feel the rotation of the planet," he explains.

"Once the brain gets used to it, you can use an app to make subtle changes to the speed of the point of heat which should alter your perception of time," he added.

For now, it's a permanent wearable rather than an implant. A previous incarnation had to be scrapped because he was 'getting burnt' at 6:00 pm.

Harbisson believes that this is just the start of a world filled with other cyborgs.

"I think now most people have included technology in part of their life, their daily life; it is part of society, technology," he says.

"I think in the next few years and decades we will see more people merging biologically with technology. "

Check out the video above to learn more about Neil's incredible story.

Art Trends 2022: How artists are taking on the climate crisis