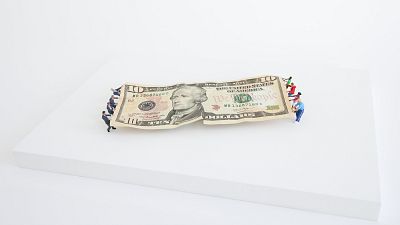 Miniature art, much appreciated on social networks, makes the leap with the first major exhibition in a European gallery in Paris, in which 20 world-renowned artists exhibit some of their most emblematic works.

This type of art has spread thanks to social media, on which artists from all over the globe post photos of their artwork under the hashtag #MiniatureArt.

The 'Small is Beautiful' exhibition, running until January 13 next year, features a total of 126 works of art with all kinds of themes and formats at the Galerie Joseph in the French capital.

Attention to detail is paramount at the exhibition, and fans of the mini phenomenon can immerse themselves in the most unlikely objects, bringing their childhood imaginations back to life inside a number of small-scale universes.

Suitable for all ages, the dimensions serve as a reminder of the skill and patience required to invent the bespoke and often wacky pieces.

There are even artists who managed to make sculptures on the tip of a pencil.

Bosnian artist Jasenko Dordevic meticulously carved the figure of a mother holding her daughter, as well as the Eiffel Tower, on pencil lead.

With more than 180,000 followers on Instagram, London-based photographer Slinkachu showcases his 'Miniature Street Art' in which he uses everyday objects to recreate miniature real-life situations.

Slinkachu created an installation of a serpent attacking a little girl and her mother from a green shoelace in a puddle, among other miniature scenes, which he usually leaves behind to pedestrians after taking photographs.

Works of German artist Frank Kunert will also attract the attention of visitors, thanks to his mind-stretching scenes and real-life themes such as death and love.

And French artist Nicolas Pierre takes advantage of the exhibition's host city while he making small-scale buildings such as the famed department store Tati in Paris.

Paintings also have their leading role at the exhibit, thanks to the South African artist Lorraine Loots, who made miniature drawings that can only be appreciated in all their details through a magnifying glass.

At the end of the tour, visitors can view how all the works were created through various videos made by the artists themselves.

Children can also get stuck in through several creative miniature art workshops organised by the venue and in partnership with the Musée en Herbe, with the aim to motivate potential new artists in this field.

'Small is Beautiful' will be on show until January 13, 2022, at the Galerie Joseph in Paris.