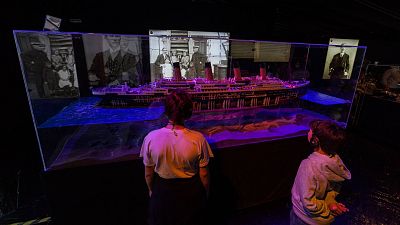 From a night gown worn by a survivor on the night the ocean liner sank, to crockery found in its first-class section - these are all poignant relics of the world's best-known shipwreck.

They form part of a new, immersive exhibit, now open in London, that throws light on the lives that were lost on the ill-fated liner.

It's being staged at the Dock X London event venue.

Titanic the Exhibition is a testament to the enduring appeal of a tragedy that's inspired films, musicals and books ever since.

Heroic deeds on board

The Titanic was the grandest ship of its time and was thought to be unsinkable.

But on its maiden voyage from Southampton to New York in April 1912, it hit an iceberg and sank, killing around 1,500 passengers.

Historian Claes-Göran Wetterholm is the curator of the exhibition and spent over 40 years studying the history of the ship's disaster.

He describes some of the 200-plus objects from the ocean liner which have never been seen in the UK before.

They include a diary kept by a Finnish passenger, as well as a pair of shoes worn by a young girl who managed to survive with her family, one of the few to survive from the third-class section.

Many of the individual tragedies are being illustrated in this exhibit.

"We have here is the ring that used to belong to a Swedish passenger Gerda Lindell. She was unfortunate enough not to find a place in a lifeboat and she was clinging to a water-filled lifeboat, and she lost her grip and disappeared," explains Claes-Göran Wetterholm.

"But right before that, I believe, that's when she dropped her ring one way or the other into the boat.

Among the exhibits on display are to-scale recreations of the ship's interior, including a first-class corridor that visitors can walk through and experience the gulf between first and third-class.

This kind of immersive exhibition has become popular in recent years, but do they do justice to the subject as traditional museums do?

Luis Ferreiro, CEO of Musealia, the company behind the exhibit, says it's a "museum exhibition."

"So actually, what we think is that people will be able to really understand better the story of the Titanic, and hopefully confront many myths and legends, misconceptions that we have from the story and actually be confronted by the authentic story, through real artefacts and real stories," adds Ferreiro.

It's likely the ship's tragic tale will continue to capture the public's imagination for years to come.

"Titanic the Exhibition" opened at Dock X London on Friday 17 December and will run until spring 2022.