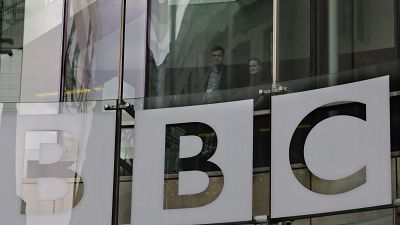 The latest statue to provoke the ire of the British public is one by Eric Gill, a sculptor and printmaker who died in 1940.

His sculpture, which depicts Ariel and Prospero from Shakespeare's late play “The Tempest,” sits above the front entrance to the BBC's Broadcasting House headquarters in central London.

British police cordoned off the area on Wednesday after a man was spotted scaling the building and using a hammer to attack the statue which has caused a controversy centred on Gill's diaries, which were published decades after his death, revealing that he sexually abused his daughters and the family dog.

The furore continued into Thursday as the debate developed into an art vs life dynamic on social media.

BBC Culture Editor Katie Razzall, who had something of a ringside seat during the statue attack, took to Twitter to ask if this was the way to go about protesting the moral values of the artist. Writer and Broadcaster David Aaronovitch was unequivocal in saying that it isn't the way at all. His argument being that the art is not the man.

This is the latest in not only a long line of statue defacements on moral grounds, but also a long line of cultural icons whose transgressions have led some to desire a ban on their output.

One of the most notable questions on this wavelength is: Should people still like the music of Michael Jackson after the myriad accusations?

The 'Billie Jean' singer was accused of child molestation and acquitted during a 2005 trial, but since his death, more allegations have come forward, which the Jackson family have repeatedly denied. This came to a head in the 2019 HBO documentary film 'Leaving Neverland', where two men, Wade Robson and James Safechuck, allege they were victims of sustained abuse at the hands of the singer when they were children. After the film was aired, NME released the results of a poll.

Critical theory has a perspective on the argument. Post-structuralist literary critic Roland Barthes made a fatal separation between creator and work by announcing the 'death of the author' in 1967. And early 20th-century Russian critic Osip Brik famously opined that Alexander Pushkin's verse novel Eugene Onegin would have existed even if Pushkin had never lived at all.

Aaronovitch talks of the anti-semitism of Wagner, the same can be levelled at pioneer poet Ezra Pound. Can their output not stand on its own? Pound's contemporary and admirer T.S. Eliot wrote that 'a work of art it autonomous'. But the realm of academic literary and artistic criticism, especially from a century ago, is no barometer for public sentiment.

The dynamic becomes even more nuanced when the content appears related to something biographical.

R Kelly singing the lyrics “lock your body up and throw away the key" in his song ‘R&B Thug’ take on meaning in relief against reports that he held women in a 'sex dungeon'. Likewise Woody Allen's quip in Annie Hall, where the character of Rob remarks that a call from Alvy (played by Allen) interrupted him in bed with 16-year-old twins. This seen in relief against Allen’s daughter Dylan’s accusation that he sexually abused her as a child (which Allen has always denied) creates a solid link between content and real life.

A couple of Twitter users saw context in the form of the statue of Prospero and Ariel. One described the piece as: "A statue of a naked child with a fully clothed adult created by a known paedophile on the BBC building."

Some critics may ascribe a homoerotic value to the relationship between the exiled Duke of Milan and the 'sprite' in Shakespeare's 17th Century drama, certainly Derek Jarman's reframing of the play in his 1979 film does, but the statue has been there for nearly one hundred years and has mostly been left alone. Mostly, but not completely.

Gill's sculpture had previously drawn criticism and activist groups had demanded its removal.

On Wednesday evening, officers and ambulance workers rushed to the scene after receiving reports that a man had used a ladder to reach the 10-foot-tall sculpture.

The Metropolitan Police said officers attempted to “engage with the man," and that another man was arrested on suspicion of conspiracy to commit criminal damage.

The incident came a week after a jury cleared four protesters of criminal damage after they pulled down a statue of 17th-century slave trader Edward Colston during a Black Lives Matter demonstration in the city of Bristol in June 2020. The four protesters, who threw the statue into the harbor after toppling it, were acquitted on Jan. 5 following an 11-day trial.