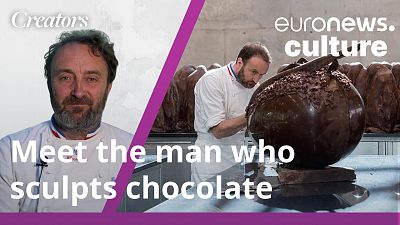 Patrick Roger is a French chocolate maker, sculptor and entrepreneur known for his incredible and enormous sculptures, hand-carved out of chocolate.

His career began somewhat by accident when he got fired from his position as a bakery apprentice. He ended up working for a chocolate maker instead, where his skills as an artist and sculptor brought him recognition.

Chocolate is a notoriously difficult material to work with. Too hot and it melts; too cold and you can't manipulate it. Roger says his secret is an ability to regulate the temperature of his hands.

“There are two of us, that I know of, in the world who can do this,” he claims. “To touch it (chocolate) without living fingerprints, you need this ability.”

Known for his attention to detail and eccentricity, Roger likes to surround himself with similar creative minds.

"As you can see here, we have crazy faces and that's what I like. All these people who are really unusual, who have a real strength...That's what I like, really strong personalities. It takes you into a different world...It's the Commedia dell'Arte!"

But the staff working for Patrick Roger shouldn't underestimate their perfectionist leader.

“It’s an absolute type of discipline," Roger says. "You need this perfection to succeed or else it won’t work…we go inside people. And from that moment, you’re judged. The discipline is immediate or the sanction is immediate.”

In 2000 Patrick was awarded ‘Meilleur ouvrier’ (Best craftsman) in France in the chocolate category and in 2018 he was honored with the country’s Legion of Honour.

In this episode of Creators, a series where we get inside some of the world's top creative minds, Patrick Roger talks about his innate creativity, his artistic processes and what it takes to be the best in your field.