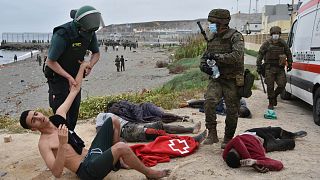 Wave of migrants tries to cross into Ceuta enclave

The arrival of thousands of migrants threatened to overwhelm the Spanish enclave of Ceuta on Tuesday, even as Spain deployed its military to the border with Morocco.

The military was able to expel nearly half of the thousands of migrants who jumped fences or swam onto European soil.

The sudden influx of migrants has created a humanitarian crisis for Ceuta, the Spanish city of 85,000 in North Africa on the Mediterranean Sea, separated from Morocco by a double-wide, 10-meter (32-feet) fence.