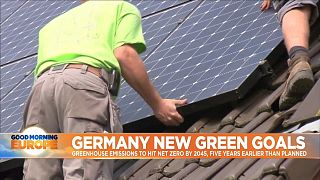 Germany's emissions will be reduced to 'net zero' by 2045

New, more ambitious targets are setting Germany on course to a greener future - including cutting emissions by 65 per cent, up from 55 per cent, from 1990 levels by the end of this decade.

"This is a fair offer to the younger generations because unlike in the past, this time we are not shifting the biggest burden to the future. This time, we're making great strides from the beginning so that we don't overwhelm future generations with unsolvable tasks," said Svenja Schulze is Germany‘s Environment Minister.

Landlords will be held responsible for half of an emissions-related surcharge on oil or gas used to heat homes, and people who don't insulate their property will be penalised.

There will be more investment in solar and wind power plants, and combustion engines are to be phased out in favour of electric cars at a faster rate.

The plans are expected to cost the German economy 12 billion euros ($14.6 billion), which Schulze said is an investment in future growth markets.

“If we make further progress there, then those will be the jobs of the future.”