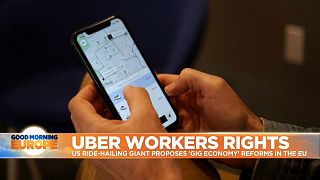 European drivers working with the giant American company Uber could soon have a new employment framework. The possibility comes after the the car ride-hailing giant argued that if governments were to start treating drivers as employees, it would have to increase costs that would be passed on to customers.

Vicky Pryce, Chief Economic Adviser and a board member at the Centre for Economics and Business Research in the UK, says these changes are crucial as the number of people depending on the gig-economy is growing,

“The problem with Europe is that each country has been doing their own thing, and what the EU is now trying to do is looking at ways these rules can be harmonised.”

Pryce added that "any move to ensure they have basic rights such as sick pay, holiday but also ensuring they earn at least the minimum wage is going to be a very important part of the whole package."