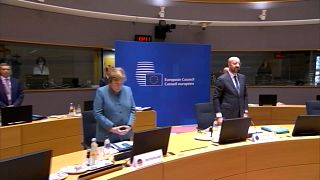 The heads of EU27 countries that had gathered for Thursday's summit in Brussels fell silent for a minute in honour of late French President Valery Giscard d'Estaing.

Giscard d’Estaing was the president of France from 1974 to 1981 and became a champion of European integration.

Giscard d’Estaing's office said he passed away on Wednesday in his family home in the Loir-et-Cher region, in central France, after contracting COVID-19 at the age of 94.

"In accordance with his wishes, his funeral will take place in strict privacy," his office said.

French and European politicians have been paying tribute to Giscard d'Estaing's legacy.