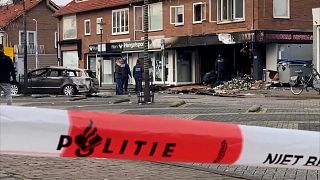 This footage shows the aftermath of explosions at three Polish supermarkets in the Netherlands over the course of two days.

The supermarkets, all called Biedronka, were hit by blasts on Tuesday and Wednesday morning.

Tuesday's blasts saw stores targeted in Aalsmeer, near Amsterdam, and in a small town in the North Brabant province. No-one was reported injured.

Then, on Wednesday, a supermarket in Beverwijk, 30km northwest of Amsterdam, was hit by an explosion.

Police are investigating the blasts and have not revealed a possible motive.