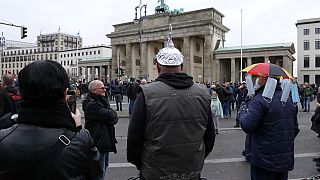 Thousands of protesters against proposed COVID-19 lockdown measures in Germany have been taking place outside the parliament in Berlin - despite a ban imposed by officials.

Bundestag members are voting on a bill of new restrictions to try to control the spread of COVID-19.

Some protesters have claimed that the measures are unconstitutional.

Berlin police, bolstered by forces brought in from elsewhere around the country, cordoned off a wide perimeter around the capital's government centre.

Bundestag members are to debate and then vote on a bill that will provide the legal underpinning for current social distancing rules, requirements to wear masks in public and closing shops and other venues to slow the spread of the virus.

The measures are expected to pass both the lower and then upper houses of parliament and be quickly signed by Germany's president.

Germany, which has been praised for its handling of the first wave of the virus, has seen 13,000 virus-confirmed deaths in the pandemic, a death toll one-fourth that of the UK.