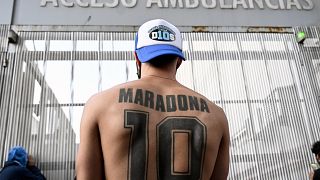 Diego Maradona has had successful surgery for possible bleeding on his brain less than a week after his 60th birthday.

Maradona had a subdural hematoma, which is an accumulation of blood between a membrane and his brain, his neurosuregon, Leopoldo Luque, explained.

"We managed to remove the chronic subdural hematoma successfully, Diego coped very well with the surgery, Diego is awake, Diego is very well." Luque said in a statement Tuesday November 3 at night.

Luque said the problem likely was caused by an accident, but Maradona said he doesn't remember the event.

The Argentine football great will rest in his room in a private clinic on the outskirts of Buenos Aires for at least 48 hours.