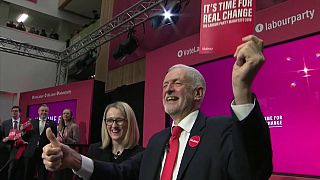 The UK opposition Labour Party has released its plans for government ahead of the country's latest General Election, the third in five years.

The left-wing party, in contrast to the Conservatives, is de-emphasising Brexit and concentrating instead on domestic issues.

It’s been almost a decade since Labour occupied Number 10 Downing Street. Their record 13 years in power from 1997 under centrists Tony Blair and Gordon Brown ended in a hung parliament which ushered in the Conservative-Liberal Democrat coalition in the wake of the financial crisis.

But with Labour failing to win the next two elections in 2015 and 2017, current leader Jeremy Corbyn is determined that the path back to power is to steer the party much further to the left than his predecessors.

At the launch of Labour's manifesto in Birmingham, Jeremy Corbyn described the party’s election platform as “full of popular policies that the political establishment has blocked for a generation.”

Unlike the Liberal Democrats who decided to make their whole campaign about Brexit, Jeremy Corbyn’s been trying to talk about a range of issues.

Indeed, the party’s Brexit policy doesn’t appear until page 87 of their manifesto and it’s not completely straightforward: it is to renegotiate, then hold a second referendum on their new deal versus the option to remain. But Corbyn doesn’t indicate which side he’d be on.

The real test might be how this strategy is going down on the doorsteps, including traditional heartlands like Wales.

Stephen Kinnock is hoping to be re-elected as Labour’s MP for Wales' Aberavon constituency. It's a location held by his party for almost a century, but in recent years its steel industry has been hit hard. While the European Union has pumped lots of funding into Wales, the country still voted to leave in the 2016 referendum.

Kinnock, son of the former Labour Leader Neil, insists there’s more to this election than Brexit:

“The clue is in the word ‘General’. It’s an election about who's going to be in government for the next five years and that means (talking about) the health service, jobs, school, public services, the number of police on our streets, the rise in homelessness, the rise in the number of foodbanks.

“These are big political issues that also need to be voted on in this General Election. So at the moment on the doorstep, people are vying between (whether its) the single issue of Brexit or are they seeing this as a more traditional General Election.

“I think in the next few weeks we’ll find out which way it’s going to break.”

His father Neil Kinnock led the party away from a similar Hard Left faction under Michael Foot a generation ago, but still suffered two election defeats.

Stephen Kinnock has a clear idea of what he thinks government is about:

“It’s to harness and regulate globalisation so that it actually works for working people rather than only working for the 1% of the wealthiest.

"So we have to be absolutely clear that on the left we believe in investment-driven economics, in borrowing to invest where that’s necessary in order to improve our infrastructure, to have an industrial policy, to rebuild our manufacturing sectors and really stand up for those communities that need us most.”