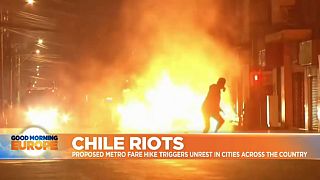 Chile's President Sebastian Pinera announced an ambitious raft of measures on Tuesday aiming to quell protests against his government.

The unrest was sparked by a metro fare hike, which has now been suspended. But the protests have grown, with anger over living costs and inequality simmering amongst demonstrators.

The proposed package includes a guaranteed minimum wage, a hike in the state pension offering and the stabilisation of electricity costs.

Pinera said he hoped to turn recent violent protests into an "opportunity" for Chile, to "make up for lost time, pick up the pace and take concrete and urgent steps" to resolve inequality that has sent tens of thousands into the streets.

The 69-year-old centre-right president asked for forgiveness for successive governments on both left and right that failed to act sooner to stem deep inequalities.

"I recognize and apologize for this lack of vision," he said.

At least 15 people have been killed after four days of protests across Chile. A state of emergency was imposed in several cities across the country amid violent clashes and arson attacks over the weekend.

Tear gas and water cannons were used against demonstrators, as police and military forces announced a night-time curfew to try and restore order.

Chilean President Sebastian Pinera said on Monday evening he would meet opposition leaders to forge a "new social contract" to alleviate inequality as thousands of protesters took to the streets to defy a military curfew.

Pinera referred to "small groups" of vandals — which he once described as "delinquents" — that ransacked market stalls, supermarkets, and small businesses. "We want to repair not only the physical damage but also the moral damage that these acts of violence have caused in the body and soul of our country," he said.

He promised to find ways to reduce the costs of basic services, like electricity, improve pensions and lower the price of medication and medical waiting lists.

"I am very conscious that this is a first step and we have a long way to go," he said.

Santiago was hit particularly hard by looting and arson, with buses set on fire, metro stations smashed and riot police struggling to quell the violence.

Chile is one of the region’s wealthiest countries, but the riots have exposed divisions over rising inequality and intensified calls for economic reforms. The sight of soldiers and tanks in the streets hasn’t been seen since 1990 when Chile returned to democracy.