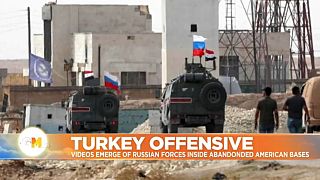 Out with America and in with Russia: troops take over US bases

The balance of power in northern Syria is dramatically shifting as Turkey continues its military offensive. Russian troops are quickly filling the vacuum left by retreating U.S. forces, even allying with Kurdish soldiers who were abruptly abandoned by President Trump last week.

US Vice President Mike Pence is set to travel to Turkey, hoping to stop the bloody advance on Kurdish forces. He will also reinforce President Trump's decision to impose tariffs against Ankara over its decision to invade its neighbour further south.