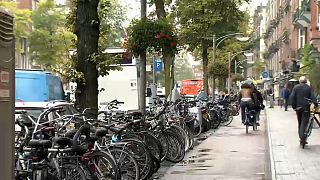 Post-referendum relocation: meet the people leaving Britain for the EU

As political leaders on both sides of the channel continue to thrash out Brexit, the effects of the British referendum are already being felt for organisations who have left the UK for the continent in the wake of the vote.

One of the most prominent departures has been the European Medicines Agency (EMA), which recently relocated from London to Amsterdam, taking hundreds of employees with it who are now starting a new life in the Dutch capital.

One of them is Kristina Larsson, head of orphan drugs at EMA.

"We're not grateful to Brexit but for us as a family it has really made a change to our lives, living in a smaller city than London," she told Euronews. "It's really interesting and a great challenge and there's a very good quality of life, that's for sure."

Noel Wathion, deputy executive director of EMA, said the move across the channel had been difficult for the continuity of operations.

"It has been challenging. It has been a bumpy ride because we only think about the fact that we had to relocate, which was in itself quite a challenge," he said.

"All the marketing authorisations holders, all the companies, have to be established in a member state of the EU. So we have to make sure that after the Brexit date, these companies can continue to operate for the products that are made available in the EU27", he told Euronews from the agency's new headquarters in Brussels.

It can be a stressful experience for employees making a cross-continental move, but Roz Fremder, an agent at Expat Help Amsterdam, there are benefits to starting a new life abroad.

"There have been quite some emotional challenges, but I think again in the end, once they are here you settle in the work/life balance, the safety of the city, the independence the children have, it has been a really positive experience," she said.