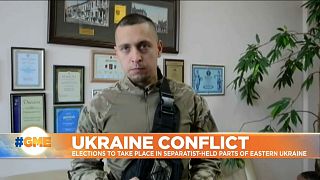 Elections to take place in separatist-held parts of eastern Ukraine

Hundreds of Ukrainians voice their anger after their president announced he had supported an agreement that will bring elections to territory controlled by Russian-backed separatists. For Ukrainian nationalists, it's a betrayal.

Volodymyr Zelensky became president promising to end the five-year conflict in the east which has left 13,000 people dead. But for some nationalists, his agreeing to the local elections is giving away too much for the sake of peace. Zelensky's proposed vote is part of the Steinmeier formula designed to break the deadlock in the 2015 Minsk peace deal.

The plan details free and fair elections in the east under Ukrainian law, verification by the OSCE international security organisation, and then self-governing status in return.

The problem for some is that the formula allows for the local elections before Russian-backed forces have withdrawn and Kyiv has control of the border. That happening will depend on Russian goodwill. Also, most of those with pro-Ukrainian views in the region have left so Russia-aligned leaders are likely to be elected. Inevitably Zelensky's risky move has divided opinion.

Mike Eckel is a Senior Correspondent at Radio Free Europe and he told Euronews:

“It is very a big gamble by Zelensky. Ukrainians are sick of the war, they are sick of the conflict and they want some sort of resolution and they have backed him up to this point.” Eckel goes on to say: “Whether Ukrainian nationalists will back him all the way, it is an open question… He will have to be very careful not to concede anything to Russia or Russia-backed separatists because the nationalists will be very quick to pounce on him if there is any sort of indication that he will give up Ukrainian territory or compromise the Ukrainian sovereignty in the East.”