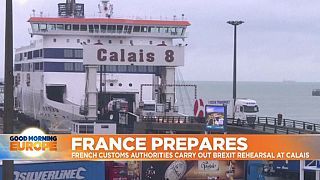 Calais carries out drills to prepare for Brexit disruption

Hundreds of French customs agents in Calais have conducted a rehearsal of the measures that could take effect in the event of a "no-deal" Brexit.

Officers inspected customs documents and shipments while lorry drivers arriving from Britain went through screening procedures designed to ensure that the amounts of goods declared matched the quantities aboard the vehicles.

The simulation aims to prevent long tailbacks of lorries on both sides of the border between France and Britain, a hassle that could surface if Britain withdrew from the European Union without a deal on October 31.

The drill comes as France has been holding similar test runs to prepare for a "no-deal" Brexit for several months.

French authorities have hired 700 new officers, including 270 officers in the Calais region, and spent 6 million euros to build new infrastructure at the port.