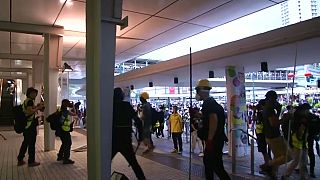 Thousands of protesters blocked roads and public transport links to Hong Kong airport on Sunday (September 1) in a bid to draw attention to their fight for democracy for the city, which is facing its biggest political crisis in decades.

Demonstrators also vandalised a subway station near the airport, prompting riot police to move in and search the area. The wrecking of large parts of the Tung Chung mass transit railway (MTR) station saw it eventually closed after CCTV cameras were smashed and turnstiles dismantled. Police made several arrests outside the building.

Pro-democracy protesters had urged the public to target access to one of the world's busiest and most efficient airports, built on reclaimed land around a tiny outlying island and reached by a series of bridges, many of which became crowded with protesters and passengers on foot, instead of the usual taxis and buses.

Sunday's demonstration followed clashes overnight between police and protesters which saw some of the most intense violence since unrest erupted more than three months ago over concerns Beijing was planning to erode the autonomy granted to the former British colony when it was handed back to China in 1997.

China denies the charge of meddling and says Hong Kong is an internal affair. It has denounced the protests and warned of the damage to the economy.