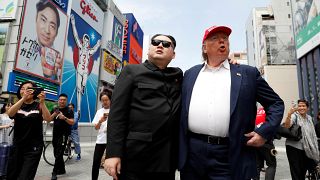 Impersonators of Kim Jong Un and Donald Trump greeted crowds in a shopping area in Osaka two days before world leaders are set to meet at the G20 summit.

Leaders of the world's top 20 economies will begin in Osaka on June 27, with the U.S.-China trade war likely to be at the top of the agenda.