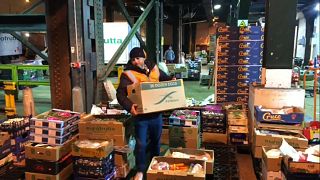 Brexit is little over a month away now and any changes to trading conditions are likely to have a significant impact on those who work with fresh produce.

Some traders say they’re already feeling the effects of Britain’s vote to leave the European Union - because they are finding it difficult to recruit.

“Before the referendum, (there was) no problem finding people willing to work at night,” says Daniel Fulgoni from Eurofrutta. “ Since the referendum it’s become a nightmare to get people to come and work.”

But Gary Marshall, Chairman of the Covent Garden Tenants Association, says he’s confident about the future, even in the case of a hard Brexit.

“I personally believe it’ll be the best thing for us if there’s a no deal. We will find a way as we always have done.

“People that voted to leave are now being said that they’re uneducated and simpletons. I’ve been successful got a great reputation throughout Europe and I’m chairman of the biggest market in Britain. If I’m a simpleton…what can I say?”

Watch Luke Hanrahan’s report in the video player above.