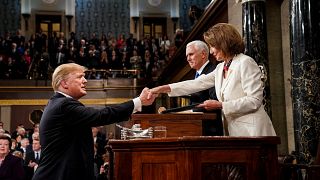 US President Donald Trump has just delivered his annual State of the Union speech, and one of the most divisive Presidents in history used his time to call for unity — but he also reiterated some of his most controversial policies.

Trump spoke about the need for a southern border wall, banning late-term abortion, and his desire to bring American troops home from Syria.

"Together we can break decades of political stalemate, we can bridge old divisions, heal old wounds, build new coalitions, forge new solutions and unlock the extraordinary promise of America’s future," he said to a packed House, with Vice President Mike Pence and House Speaker Nancy Pelosi sitting behind him.

Then he then went on to draw sharp divisions around immigration and border security policies.

"Wealthy politicians and donors push for open borders while living their lives behind walls, gates and guards. Meanwhile, working-class Americans are left to pay the price for mass illegal immigration, reduced jobs, lower wages, overburdened schools, hospitals that are so crowded that you can’t get in, increased crime and a depleted social safety net."

Trump spoke similarly on a range of topics — using rhetoric that called for bipartisanship, but laying out policies that were as hard-edged as ever.

He also confirmed that his next summit with North Korea's Kim-Jong un will be on February 27 and 28 in Vietnam**.** That announcement comes just a week after US intelligence chiefs stated their assessment that North Korea is unlikely to give up nuclear weapons.

She got the spot often reserved for a rising star in the opposition, but a spot often known as a cursed gig. Following the President of the United States, with all the pomp and ceremony of a packed House of Representatives, is never an easy task. And rebuttals over the years have been plagued with staging errors and awkward deliveries — Republican Michelle Bachman looked at the wrong camera, Marco Rubio darted off air for a gulp of water, and Democrat Joe Kennedy III just last year showed up with strangely shiny lips under the glare of the brightly lit scene.

Abrams managed to avoid any obvious gaffes, choosing to start with an anecdote about her father giving his only coat to a homeless person.

In her rebuttal, she brought up left-wing policies on gun control, health care and voting rights, and admonished the US President for his relationship with the truth.

"Even as I am very disappointed by the president’s approach to our problems – I still don’t want him to fail. But we need him to tell the truth, and to respect his duties and the extraordinary diversity that defines America."