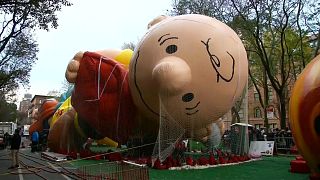 Giant balloons were blown up on Wednesday ahead of the 92nd annual Macy's Thanksgiving Day Parade.

In total, six new characters were introduced to this year's parade.

The parade through Manhattan was also set to include clowns, cheerleaders and marching bands.