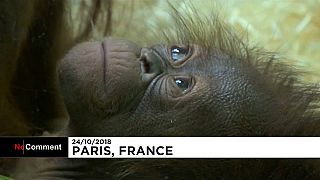 The Paris zoo of "La Menagerie" in the Jardin des Plantes gardens welcomed the birth of a Bornean orangutan named Java, the zoo's first since 2005.

Java, a female who was born on October 17, is the first infant of her species to be born in France this year out of the six zoological parks that house the frizzy orange-haired great apes.

Orangutans infants stay with their mothers for about eight years and they can survive in the wild for 40 years and up to 50 years in captivity.

Bornean orangutans, like Java and her mother Theodora, are listed as critically endangered by the International Union for the Conservation of Nature (IUCN) due to deforestation and poaching in their homes of Indonesia and Malaysia, with 50,000 to 60,000 estimated to be left in the wild.