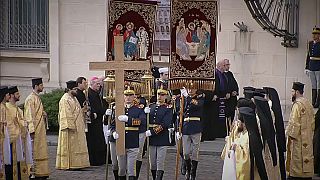 Representatives of several European and international royal families arrived in Romania to attend the funeral of King Michael, on December 16.

King Michael of Romania died on 5th of December at his home in Switzerland after years of ill health.

The funeral takes place at the Patriarchal Cathedral in Bucharest. He will be buried later that day at Curtea de Arges beside his wife, Queen Anne who died last year.

The Prince of Wales is representing the British Royal Family at the funeral. King Juan Carlos and Queen Sofía also attended the ceremony.