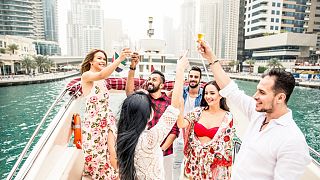 Dubai is suspending its 30 per cent municipality tax on alcohol sales. The move is expected to further boost the appeal of Dubai as a comparatively liberal tourist hub in the region.

The one year trial will also suspend the AED 270 (€70) annual licence fee previously needed to buy alcohol for consumption at home.

"With the removal of 30 per centmunicipality tax and a free alcohol licence, buying your favourite drinks is now easier and cheaper than ever," MMI, one of two major purveyors of alcohol in Dubai, said on its Instagram account.

A post shared by MMI Bringing more to life (@mmidubai)

Prices in its stores across the emirate reflect the removal of the tax, it added.

Another retailer, African+Eastern, confirmed the tax no longer applied, but prices would remain subject to 5 per cent VAT.

The Dubai Media Office did not immediately respond to a request for comment.

Will bars in Dubai be cheaper thanks to the tax cut?

Alcohol prices are notoriously high in Dubai, with pints costing around 45 AED (€11) in many hotel bars.

While liquor stores like MMI are passing the discount directly on to customers, it is unlikely that the tax break will translate to a 30 per cent discount at bars in Dubai.

According to Time Out Dubai, an increase in corporate tax and a need to shift existing stock will factor in to prices, with some bars predicting drinks will be cheaper by 4 AED (€1) on average.

Do tourists need an alcohol licence to drink in Dubai?

To purchase alcohol for consumption at home, Dubai residents must apply for an alcohol licence with their Emirates ID. This is now free of charge until the end of 2023.

Tourists can bring their original passport to liquor stores in Dubai, where they can apply for a free 30-day licence.

A personal licence is not required to drink at licensed restaurants, hotels and bars.

Which countries are competing with Dubai for tourists?

Dubai's economy has rebounded swiftly from the COVID-19 pandemic, with GDP growing 4.6 per cent on the year for the first nine months of 2022.

Tourism is a key pillar of Dubai's economy, and tourist numbers grew more than 180 per cent in the first half of 2022 over the corresponding 2021 period.

Saudi Arabia, for example, is investing billions to burnish its tourism appeal with efforts such as the Red Sea Project, which will include hotels, residential properties, leisure facilities and entertainment. Various Middle Eastern countries are also playing host to major cultural and sporting events.

The first casino in the Gulf, where Islamic rules have long kept gambling off limits, is expected to open in the emirate of Ras Al Khaimah in 2026, at a resort being built and operated by Wynn Resorts.