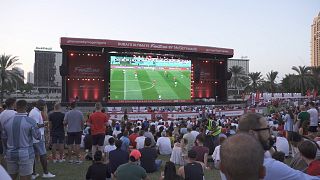 Fans are finding that Dubai is a football-focused destination, as they flock to the emirate to be close to the FIFA World Cup taking place in Qatar. Dubai World Central (DWC) airport is operating up to 120 shuttles a day to Qatar. A neighbour of the UAE, flights to Qatar take just an hour or so, however, many fans are happy to remain in Dubai and watch the tournament there.

Dubai has invested heavily in vast football fan zones, erecting stadiums with VIP seating and high-tech sound systems to make viewers feel like they’re in the heart of the action.

One of only six official FIFA Fan Festival stadiums in the world, BudX FIFA Fan Festival at Dubai Harbour is welcoming up to 10,000 fans a day. Hosted by local events company BRAG, CEO Ramzi Nakad believes that the high standard of the facilities led FIFA to select Dubai as an official fan zone destination.

It’s got all the infrastructure and it’s got the hospitality.

“We’re very proud to host an official FIFA Fan Festival. Dubai is a city of the future. It’s got all the infrastructure and it’s got the hospitality,” says Nakad. “Dubai Harbour is an iconic new development where the new cruise terminal has been built. It’s perfectly located for the Fan Festival. You have the beautiful backdrop and the stunning view of JBR [Jumeirah Beach Residence], as well as the beach and Bluewaters Island. You can even watch the games from a yacht.”

In Dubai, an emirate with a population of around 80 to 90% expats, football fans can find like-minded followers by locating their dedicated supporters’ club; almost all major teams are represented in Dubai’s burgeoning fan club arena.

Kieran Lindsay is the chairman of England in Dubai, the supporters’ club for England fans. “For a number of years, I’ve been looking after the England in Dubai supporters’ club, which meets in different venues during big tournaments like the Euros and the World Cup,” said Lindsay. “This year, we’ve got the pleasure of hosting the gathering at McGettigan’s Fan Zone in Dubai Media City Amphitheatre. With 20-metre screens and 5,000 fans, it doesn’t get much better than this.”

Dubai resident Peter Redding hosts a live-and-online hybrid football chat show ahead of each game. Located at The Dubliner’s in Le Meridien Dubai, the show features live chat with famous footballers both in person and via video link. It’s free to attend in person and fans can also join online from anywhere in the world to ask guest pundits pertinent questions.

Those who want to partake in the ‘beautiful game’ can do that in Dubai, too. Precision Football in Ibn Battuta is a cutting-edge sports facility with multiple pitches and a technology centre where players of all abilities can sharpen their skills.

Training devices include virtual reality gadgets that allow users to practice in alternate realities, such as a virtual Wembley Stadium, and a series of circular paddocks, called Icons, fitted with lights to help footballers improve their agility. Players stand in the centre of the Icon and kick a ball at the lights fitted within the barrier as they turn green, scoring a point for each green light they hit. Used by elite professionals, all of the equipment at the centre is available to use by all visitors.

Players ready to make a long-term commitment to the sport can join academies hosted by ex-professional footballers. Ex-Premier League player Danny Guthrie is the head coach of The Football Academy, a training ground for players from infants to young adults. Held at Amity University in Dubai International Academic City, the top team, called the EPC (Elite Performance Centre), plays professionally in the UAE’s third division. This is the place to enrol for a chance to be among the football stars of tomorrow, with international scouts regularly reviewing footage from the academy to find hidden talent.