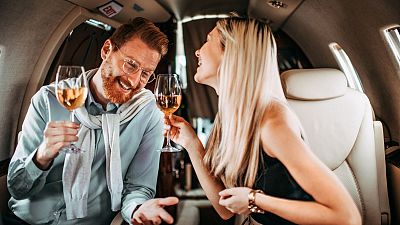 In a recent Instagram poll, Euronews Travel asked readers about their worst passenger experiences. Not surprisingly, a majority of the answers involved drunk fellow travellers.

So here we pose the question, should alcohol be banned on flights?

In 2017, the International Air Transport Association (IATA) stated that over 8,000 unruly incident reports had been filed, averaging one incident in every 1000 flights.

That might not seem like much, but not every airline is a member of IATA and - needless to say - not every drunk incident gets filed.

Typically, unruly incident reports are filed when a passenger has physically or sexually insulted a crew member or another passenger, has caused damage to the aircraft, or has been caught smoking or drinking their own alcohol.

A lot of incidents are either managed onboard or reported to the airline's local governing body. Sadly, many of these situations are also the norm for flight attendants and get shrugged off as typical flight behaviour.

A flight attendant's view of alcohol

Emirates flight attendant Emma* (who asked for her name to be changed) has seen all kinds of passengers over the years.

On alcohol misuse, she says “This is a tough one because we don’t want to stop anyone from having fun, but drunk and disorderly passengers can be a health and safety risk - which passengers obviously don’t think about.”

She recalls one flight from London to Dubai, just before the Abu Dhabi Grand Prix. The plane’s Business Class was full of hospitality ticket holders and things got messy, she says.

“The onboard lounge was overcrowded, they refused to sit down and the number of people that ended up being sick towards the end was just insane. It reminded me of Fresher’s Week and at times it was really entertaining.”

“But while they were all living their best lives, we essentially lost control of the cabin because of how loud they were and their refusal to follow our instructions. Had there been an emergency situation, we wouldn’t have heard any PAs, we wouldn't have easy access to the emergency equipment and we definitely would not have been able to move quickly.”

There are a lot of people who are not good drunks, which is always a scary situation at 40,000 ft.

Emma thinks an ideal situation would be to limit it to meal services only, and offer only one round on short-haul flights. “Not everyone is a nightmare when they travel and we do understand people get excited when they fly,” she says. “But there are a lot of people who are not good drunks, which is always a scary situation at 40,000 ft.”

On another flight to Australia Emma had to stop serving a man who had had one too many. “His friends didn’t take the news so well and kept badgering us to give him another drink,” she recalls.

“So I listed all the ways them being drunk endangers everyone in the aircraft and how it only takes 90 seconds for a plane to catch fire and burn into nothing.

“They all took a glass of water and returned to their seats. It was very satisfying.”

The way airlines advertise alcohol makes a difference, she adds. Emirates is known for its onboard lounge and for serving top-shelf alcohol without charge, which Emma thinks encourages drinking. “Because of that we ignore a lot of incidents and behaviours.”

We’ve all seen drunken behaviour on nights out and most of us have a friend or family member that should not drink. Those characteristics don’t change at altitude.

The differences are that there are no bouncers to handle the situation and no open doors to kick people out. The flight attendants and other passengers also don’t have anywhere to escape.

But is it fair to put a total ban on alcohol just because the minority can’t handle their liquor?

What passengers say about an alcohol ban

George Blackburn, 24, believes that alcohol should be served, “I can see both sides of the argument but ultimately I think it should be allowed, with people taking responsibility for their own actions.”

“It’s a great way for the airlines to make a bit of extra money and it helps pass the time. Depending on the airline you fly with, sitting on a plane can be long and boring. Especially when there are no TV screens. Having a few drinks helps break up the time, it makes the flight a bit more social and eventually puts you in a nice sleep.”

“I also think it’s a great way to start your holiday - get seated on your row with your mates, order in a few drinks and plan the next week. It’s part of the holiday.”

On the other side of the aisle, frequent flyer Jessica Horton, 33, thinks alcohol shouldn’t be served. “I honestly don’t see the point in drinking during a flight,” she says. “Sure, have a couple in the terminal but flying already makes me feel unwell, I don’t really want to add to that.”

It would be a different story if everyone drank responsibly, she said, acknowledging her view is coloured by bad experiences.

“I’ll never forget my flight to India. I sat next to this guy that drank continuously and he would not stop talking to me. He wasn’t being inappropriate or anything. He just wouldn’t take my hints and all I wanted to do was watch a film and go to sleep.

"Instead, I learned everything about his family and I think I was invited to a couple of weddings. ”

So what’s the verdict on alcohol-free flights?

Sadly, there is no ‘yes or no’ answer as to whether alcohol should be banned onboard.

A majority of passengers can handle their alcohol and do manage to keep to themselves. But when it gets out of hand, it can lead to unpleasant and sometimes dangerous situations.

Airlines also have procedures in place to manage drinking but they are not easy to enforce. Especially when there isn’t a big burly doorman to implement them.

There is also the flight time and types of airlines to consider. Why ban alcohol on a flight that is 90 minutes long when it makes so much money in alcohol sales?

Perhaps limitations should be imposed and served only when there is food. Or could there be a system where the cabin is separated into drinking and non-drinking sections?

But for the time being, alcohol is a standard part of flights as we ease ourselves back into global travel.