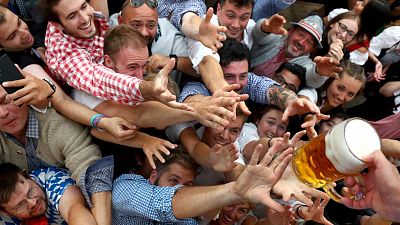 After a forced two-year hiatus, Oktoberfest is returning to Munich this weekend.   -   Copyright  Canva
By Alexandra Leistner   •  Updated: 13/09/2022

After a forced two-year hiatus, Oktoberfest is returning to Munich this weekend.

Known by locals as "Die Wiesn" - or “the fields” - the huge German beer festival takes over a huge space in München called Theresienwiese and has become a magnet for revellers all over the world.

As anyone who has ever been to Oktoberfest knows, it's not just about drinking local beer brewed with Munich groundwater. Dozens of rides - from carousels to the drop tower - plus shooting galleries and countless Bavarian food stalls are draws for all the family.

For the past two years, Oktoberfest was cancelled due to the COVID-19. Now it is back, it will be restriction-free - but that’s not to say there’s no fallout from the pandemic.

This year’s set-up began three weeks earlier than usual to repair any wear or damage to tents or infrastructure that may have occurred during the break.

Munich's mayor Dieter Reiter also admitted last week that the lack of staff in the hotel and restaurant industry is also affecting the planning of the festival, with many roles still left unfilled.

Yet cancellation is not on the cards. Organisers assured Euronews, "The Oktoberfest will be set up as planned. There is no question of a cancellation on the part of the organiser."

How will Oktoberfest be different in 2022?

This year the Oktoberfest will begin - as always - in September at the 42-hectare Theresienwiese festival grounds, located in the west of the Bavarian state capital.

The tapping of the barrel will take place on Saturday 17 September at 12 noon. The final day will be 3 October, German Unity Day - and therefore a public holiday - making the festival one day longer than usual.

On the last evening, in certain tents the end of Oktoberfest is celebrated with candlelight and swaying music - a real goosebump-moment for some visitors.

Despite the two-year break, visitor numbers are expected to be comparable with 2019, according to Susanne Mühlbauer, spokeswoman for tourism for the city of Munich.

Nevertheless, the city council's economic committee has decided to extend the opening hours of rides and beer tents at the "Oide Wiesn". The Devil's Wheel, Flea Circus, roller coaster, Ferris wheel and other rides will open at 9am - one hour earlier than in previous years - and close at 11:30pm. The marquees will open at 10am on weekdays and 9am on weekend, except for the first day, when they open at 12pm. They close at 11:30pm.

On the first Sunday of the festival, there will be the traditional costume and marksmen's procession through the Old Town to the Theresienwiese. It will be broadcast live on TV.

Almost its own attraction, a brand new tent will be joining the party at Oktoberfest 2023.

Hosted by restaurateur Peter Reichert, the 15-metre Bräurosl tent will be taller than all the other tents at and will hold a total of 8,250 people across its indoor and outdoor spaces.

What is the Oide Wiesn?

If you thought the Oktoberfest was traditional, with brass bands playing while visitors munch pork knuckles in their lederhosen and dirndls, you've never been to the Oide Wiesn - the “old Oktobrfest”.

Located in the south of the Theresienwiese, next to the Ferris wheel, this part of the festival demands a €3 entry fee, but you get a lot in return. The beer gardens and three festival tents are particularly cosy here - and usually not so crowded.

The historic rides, some of which are more than 100 years old, are affordable: for €1 you can enjoy a round of the boat swing, chain carousel or roller coaster. And those who want to learn about the history of the Oktoberfest will get their money's worth in the museum tent.

How expensive is the beer at Oktoberfest?

Every year locals eagerly await - and note with a shake of the head - the price of Oktoberfest’s one-litre beer mugs known as Maß (pronounced with a short ‘a’).

Waiters and waitresses at the festival are sure to be disappointed by the price hike, as it encroaches on their tips, because most customers round up when paying.

Oktoberfest. tips: From when to eat to how to book

Most Munich residents know that the best time to enjoy Oktoberfest delicacies is on weekday lunchtimes, when it’s easier to find a table. Depending on the tent, main courses range from €8.90 to €14.50.

Even though traditional Bavarian dishes are relatively meat-heavy, all the tents now also offer vegetarian - and sometimes even vegan - dishes.

When entering the festival grounds, bags are checked for size and contents. Anything exceeding a volume of three litres can be handed in at various luggage storage facilities - for a small fee.

Prams are not allowed on weekends and weekdays after 6pm.

Even though some tables are kept free for spontaneous visitors, reservations are recommended, particularly on weekends. You can book on the respective websites of the festival tents.