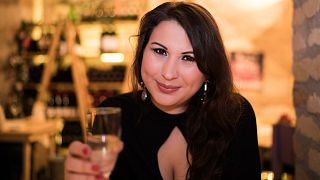 Budapest, dubbed the Paris of the East, is Hungary's beautiful, bohemian capital. It is well known for its chic cafes and buzzing bars, and these are now helping boost the profile of little-known Hungarian wines.

In the 1990s, Hungary's wine-making scene finally came out from behind the iron curtain after the country's communist regime collapsed.

Tokaji, a sweet white wine, has managed to claim its space on international shelves, but most Hungarian wines remain unheard of outside the country.

Now, Budapest's burgeoning wine scene is setting the city up to be one of Europe's most exciting new wine travel destinations.

For such a small country, Hungary has a very complex wine culture. Winemaking has ancient origins, with records of extensive vineyards as early as the 5th century CE.

But the vine-destroying aphid phylloxera in the 19th century and the arrival of the Soviet regime in the late 1940s halted Hungary's wine development. In particular, under communist rule, wineries were managed by the state and quality took a nosedive.

"Wineries had to make mass-produced wine that emphasised quantity over quality," explains Anna Gézárt, export manager at the Etyeki Kúria winery near Budapest.

So in 1989, when the communist regime collapsed, Hungary began to reinvent its vinification. “Winemaking had to be completely restarted and recalibrated after communism,” says Gézárt, “and redesigned for smaller production.”

The country has 22 wine regions, each with differing terrains, climates and grape varieties. As sommelier Gábor Becker explains, this means Hungary often surprises with its range of wines.

"We have sparkling whites, rosé, light and full-bodied reds and sweet wines," he says. Wineries cultivate international varieties like chardonnay and sauvignon blanc as well as indigenous grapes like furmint and zenit.

The abundance of small wineries means many don't produce enough bottles to export. So the best way to really experience Hungarian wine is to go to Hungary.

Where to try Hungarian wine in Budapest

The capital city is an ideal base for diving into Hungary's wine culture. Becker is the sommelier at the Four Seasons Hotel Gresham Palace, an iconic art nouveau building along the Danube River. The hotel's bar, Múzsa, is one of the most popular places in the city to try local wines (and spectacular cocktails).

Beneath a glass-panelled dome with stained glass inserts, the bar channels an Orient Express vibe with plush purple and blue upholstery and decorative gold lamps. For a pre-dinner fizz, Becker recommends Kreinbacher, a sparkling white wine made with 100 per cent furmint grapes in the champagne method. “I reckon in a blind tasting it could be mistaken for champagne,” Becker says.

For a more comprehensive introduction to Hungarian wine, walk across the mosaic-floored foyer to the hotel's Kollázs restaurant. If you're happy to splash out, choose the ‘blind date’ with the chef and sommelier for a feast of elegant dishes each paired with a local wine.

Hungarian speciality foie gras is served with a dry version of tokaji from the Szepsy winery. Made with the furmint grape, it is fresh with high acidity, "similar to a good Chablis," according to Becker. The venison main is married with the restaurant's red, a cabernet franc from the Sauska winery in the famous winemaking town of Villány in the south."

A totally different atmosphere, but equally interesting wines, can be found at Budapest's ruin bars. Located in the historic Jewish quarter, these are hippie, bohemian dives that have taken over dilapidated buildings abandoned after WWII.

The trendsetter is named Szimpla Kert. Behind a crumbling facade is a labyrinthine bar with a maze of dimly lit rooms crammed with shabby furniture, eccentric art and the graffiti of thousands of revellers on the walls.

What are the best winery tours near Budapest?

Etyek is a small town and winemaking hub around 30 km from Budapest. Hotels like Gresham Palace can organise transportation or there is a public bus to the centre. On the hillside above the settlement is a rural area dedicated to vineyards.

A cobbled lane is lined with small, pointed-roofed houses with big wooden doors. These are press houses that are still owned by families in the town. A couple of the buildings are owned by the Etyeki Kúria winery, where export manager Gézárt works.

Inside a luminous glass-walled room with a view of a vine-covered hillside, visitors can partake in wine tasting and lunches with wine pairings. The area typically produces white and rosé wines. The Etyeki Kúria winery produces a dry white wine from zenit grapes with high acidity and notes of apple and pear.

“Our winemaking culture is really beginning to attract attention,” Becker says, “and it offers something fresh and unknown for enthusiasts.”