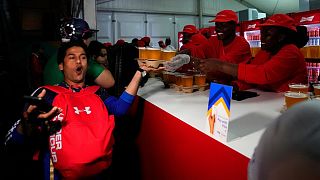 The country’s only liquor store is located in a dusty neighbourhood on the outskirts of the capital, Doha. Here, guards stand duty at a gated compound ringed with razor wire, carefully checking passports and permits before allowing anyone inside.

Rigid limits on alcohol are a fact of life in this conservative Muslim nation, which follows the same strict Wahhabi interpretation of Islam as its neighbour Saudi Arabia.

Football fans coming to Qatar for the World Cup got a taste of that just before the tournament as authorities cancelled beer sales at stadiums.

Alcohol is only available inside the fan zone, FIFA Fan Festival - where €13 Budweisers are sold - other fan destinations and at licensed hotels, restaurants and bars.

“Not to say that you need alcohol to fuel your life, but it's a good time,” says Ed Ball, an American who created an online map of bars in Doha, which has been viewed over 875,000 times.

“The idea being passed around that you can't drink in Qatar is wrong. There are places,” he continues. “I know [drinking is] not part of Qatar … but it's part of the World Cup. One of the biggest sponsors is Budweiser so it just goes to show you it kind of goes hand in hand," he adds.

Those who imbibe should be aware of the country's strict rules on alcohol. Drinking in public places and being drunk are both an offence, as is offering alcohol to Muslims. Once purchased, alcohol must be hidden from sight and taken straight home. Supporters are not permitted to bring alcohol into the country or outside designated zones.

Qatar’s state-controlled off licence requires a permit to enter

In addition to the bars, there's the off licence where non-Muslim residents can shop after applying for a government-issued licence.

Located next to an Indian school in Doha's Abu Hamour neighbourhood, it is run by the Qatar Distribution Company, a state-owned enterprise under the umbrella of Qatar Airways, which holds exclusive rights to administer alcohol permits, and distribute alcohol and pork in the country.

The store - currently the only one selling liquor in Qatar - operates on an appointment system.

As well as alcohol, it sells a small selection of frozen pork pepperoni pizzas, slabs of bacon, Spam and cans of pork and beans.

How much does alcohol cost in Qatar?

In Qatar’s liquor store, bottles of wine largely run from €12 up to €43. A litre of Absolut vodka goes for €40, while a litre of Jack Daniels whiskey sets you back €66. A 24-pack of standard Budweiser cans costs nearly €50.

Bars in Qatar typically scan IDs of those heading in, with many working on a voucher system during the tournament to make sure fans spend at least a certain amount.

Why is alcohol banned in some Middle Eastern countries?

Across the wider Persian Gulf, alcohol remains banned in Iran, Kuwait, Saudi Arabia and the sheikhdom of Sharjah in the United Arab Emirates. Drinking alcohol is considered haram, or forbidden, in Islam. Imams point to a verse in the Quran calling wine “the work of Satan”.

But the region as a whole has a long history with alcohol, itself an Arabic word. The 8th century poet Abu Nawas was even known for his ‘khamriyyat’, or ‘wine poems’.

Both alcohol and pork face a 100 per cent import duty in Qatar. The country says it uses the tax revenue to improve health care, infrastructure, education and other public services.

Visitors are not allowed to bring alcohol into the country. Many hotels are dry and prohibit guests from bringing alcohol to their rooms.

Even with those restrictions, Qatar sold 23.2 million litres of alcoholic drinks in 2021, according to data from Euromonitor International. Though dwarfed by the United Arab Emirates' 115 million litres sold in the same period, Qatar's numbers show a 14.6 per cent growth as the pandemic waned.