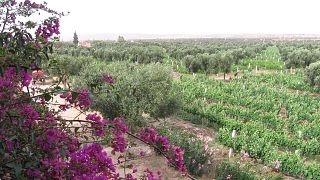 I visited the Moroccan port town of Essaouira with many expectations from the walled city and medina. My imagination was filled with images of souks and cafes. But alcohol, and in particular wine, did not feature in my pre-Moroccan trip fantasy.

I was not aware that wine was served in the country until I sat down for dinner at Umia, one of Essaouira’s upmarket restaurants. This is where my journey into Moroccan wine began.

While enjoying the local seafood on the menu, I asked the waiter about the freshness of the tipple in my glass. He explained that the organic Perle white I was drinking was produced locally at a winery called Domaine Val D’Argan. I couldn’t believe what I was hearing. The waiter had my attention.

Fortunately, I was visiting Essaouira at the same time as my friend Linda Brumfitt from So Morocco. We had plans to meet straight after dinner in the medina where we were going to explore the buzzing alleyways filled with art galleries, shops and stalls selling crafts, and courtyard riads converted into hotels and cafes.

After asking her about Morocco’s wines, she planned for me to visit the Domaine du Val D’Argan winery the following day.

A taste of the Rhone Valley in Morocco

The next morning, I hopped in a taxi at my hotel on the outskirts of Essaouira and headed to the vineyard. About halfway through the 20-minute drive, the traffic and people walking along the dusty roads faded to be replaced by groups of goats settling in the surrounding Argan trees.

As I waved goodbye to my driver, I was met by Rony Tjamack, a guide at Domaine du Val D’Argan. Walking through the rows of grapevines, Rony began to tell me the story behind the winery.

In 1994 Charles Mélia decided to leave behind his life in France as a Châteauneuf-du-Pape wine producer in pursuit of adventure. He was a man with a vision because the land he purchased had no access to everyday essentials such as electricity and running water.

It took Charles four years to clear rocks and foliage from the land, build the winery, cellar, restaurant and guest house, and plant 12 hectares of land with grapes. Today, the vineyard has grown to 52 hectares.

Not only was he was determined to adopt traditional Moroccan methods and produce organically farmed wines - Charles also wanted to bring a taste of France to the region. He planted grapes known throughout the Rhone valley including Ugni Blanc, Grenache Blanc and Clairette for the whites alongside Mourvèdre, Syrah, Grenache and Marselan for the red and rose varieties.

Mother nature also has her hand in the business. The winds from the Atlantic Ocean keep the region cooler than other parts of Morocco during the summer months. A wind and drought-tolerant crop called sorghum protect the grapes from over sun exposure.

No better place for Moroccan wine

Domaine du Val D’Argan’s cellar has a traditional cuverie which in simpler terms is a building attached to the vineyard. This is where the winemaking magic happens, and where it is stored and matured. A powerful system of thermoregulation makes sure that the precious liquid is vinified at the optimum temperature.

The vineyard produces around 200,000 bottles every year that are available across restaurants and wine shops throughout Morocco. Just ten per cent of the wine leaves the North African nation.

So with no better place to taste what the country has to offer, we sat down to sample some of the wines.

The Orion white was aromatic with fruits, gingerbread and just a hint of tobacco while its red counterpart managed a powerful and smooth taste with a blend of mocha, leather, and overripe fig.

I also tried the Gazelle rose with fresh notes of raspberry, currant and citrus. The Gazelle black, with aromas of citrus, perfectly complimented the Moroccan vegetables and chickpeas tagine, couscous, and succulent barbecued meats.

A night among the vines

As our conversation continued into the evening, Rory reminded me that the winery also had a three bedroomed guesthouse. I spoke to a friendly member of the team in the restaurant and quickly made the decision to stay for the night in one of Domaine du Val D’Argan’s guesthouses.

I woke the following morning in a charming and peaceful bedroom overlooking the swimming pool. I could not resist a quick walk around the garden interrupted only by the gentle sound of birdsong and the rustle of the wind in the trees. Despite being just a short journey from Essaouira, it felt worlds away from the hustle and bustle of the city.

With breakfast out of the way, I took a quick swim in the winery’s pool before heading back to Essaouira to meet Linda for lunch. I couldn’t wait to tell her all about my wine adventures over another glass of Perle white.