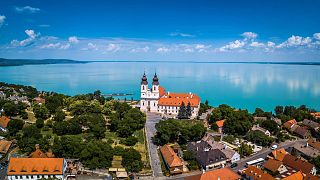 Think of Hungary and you might imagine the thermal baths and ornate architecture of its capital city. But look beyond Budapest and you’ll find a country full of natural wonders, delicious food and award-winning wine.

From the shores of Lake Balaton - the largest lake in central Europe - to the historic wine region of Tokaji, it’s time to start exploring the lesser-known regions of Hungary.

To set tourists on their way, Visit Hungary has divided the country up into parts, explains Zsófia Jakab, deputy CEO of the Hungarian Tourism Agency.

“We’ve defined 11 different destinations throughout Hungary. If you can imagine the whole country, we’ve put layers on the map - where are the hotels, where are the attractions, where is the gastronomy?”

In case 11 regions feels a bit overwhelming, we’ve picked our top six things to see and do in Hungary, beyond Budapest.

Can I stay in a castle in Hungary?

If you want to live like royalty, spending the night in a Hungarian castle is the way to go. The countryside here is littered with majestic castles, from the epic sweep of Boldogkő castle, perched on a vertical cliff face, to Füzér castle, a worthy contender for the fairytale crown currently held by Neuschwanstein Castle in Bavaria, Germany. Built on a volcanic cone in the 13th century, while you can’t stay in this ancient fortress, it’s worth a visit for the views alone.

“The castle and the palaces are really important in Hungary, we have many of them. And the Hungarian tourism agency just a couple of years ago announced a big fund to renovate them,” explains Zsófia Jakab.

If you want to spend the night though, you should head to the romantic Fried Kastélyszálló Castle in Simontornya. Surrounded by beautiful vineyards, the castle is only 40 kilometres from Lake Balaton. Make sure to sample the winery during your stay and explore the surrounding parkland.

Where are the best thermal baths in Hungary?

Hungary is famed for its spa culture, with more than 200 sources of water with a proven medicinal effect. So whether you’ve come for hydrotherapy or simply want to lounge in warm waters, Hungary is the perfect place to immerse yourself.

While Budapest is the ultimate spa city, there are plenty of spa towns outside of the capital.

We have many, many spa towns. Altogether in Hungary, we have more than 200 spas. And we have the biggest geothermal lake in Hungary too, which is Hévíz, near to the Balaton region

“We have many, many spa towns. Altogether in Hungary, we have more than 200 spas. And we have the biggest geothermal lake in Hungary too, which is Hévíz, near to the Balaton region,” says Jakab.

Covering 46,350 m2, Hévíz lake is fed by a sulphurous spring and thanks to a large supply of water, the lake replaces itself every 72 hours, meaning you’ll be bathing in the freshest of waters. There’s no need to worry about the lake being cold either. The surface temperature is around 24 degrees Celsius in winter, and in the height of summer it can reach an impressive 38 degrees Celsius.

What can I do in Lake Balaton?

Close to Lake Hévíz you’ll find the mighty Lake Balaton. Not only is the lake the most popular region outside of Budapest, it’s also a great destination for outdoor adventure.

“You can do many things there, you can try the gastronomy, go wine tasting, or you can ride a bicycle. It’s 200 kilometres around the lake, and this is actually the biggest lake in the Central Europe region,” explains Jakab.

Once you’ve tackled the 210 kilometres of cycle track around the lake (and then had a well deserved rest), make sure to check out the Tapolca Lake Cave. Here you can jump in a rowing boat, float through the 180 metre cave, and admire the rocky walls and narrow passageways.

Is Hungary easy to explore by public transport?

Hungary has a great public transport system that connects all of the major towns and cities. Fares are very affordable too, with regular services running all week, making the country a great destination for travellers keen to minimise their climate impact..

If you prefer a life on two wheels, then part of the epic 2,600km Danube Cycle Path - which stretches from Germany to Romania - passes through the country, taking you from the border with Austria down to the Serbian border.

Where can I find Hungary’s best wine regions?

After all that cycling, you’ll need a drink. Luckily, Hungary has some of the oldest vineyards and wineries in Europe.

Tokaji Aszú is the world’s oldest sweet wine, but the region also produces dry white wines too. With 5,500 hectares of vineyards, there’s no shortage of varieties on offer here.

The Tokaj region has 5,500 hectares of vineyards and 27 towns and villages and is best known for its sweet aszú wines, which are made from botrytized grapes. If sweet wines aren’t your thing, you’ll be pleased to hear that more than half of the wines produced here are actually dry.

While Tokaj is the most famous, there are plenty of other wine regions to explore.

“The Balaton region is famous for more fresh, summer wines like white wines you can enjoy during the summertime,” explains Jakab, while Villány in southern Hungary is renowned for its rich red wines such as Cabernet Franc, Cabernet Sauvignon and Merlot.

Does Hungary have Michelin starred restaurants?

“Last week the Michelin Guide selected 62 restaurants throughout the whole country. And this is new for all Hungary, because until this time, just Budapest was on the map. This is the first time that Michelin has checked the whole country,” says Jakab.

As a result, Hungary now has two restaurants with two Michelin stars, with Platán Gourmet in Tata joining Stand in Budapest. There are seven one star restaurants dotted throughout the country too, including Salt in Budapest, which also has a coveted Michelin Green Star - one of four such restaurants in the country.

“These are restaurants that are working in a sustainable way, so they grow their own food - like farm to table cooking,” says Jakab. “Gastronomy is one of the most important parts of our sustainable mission, most of the restaurants are trying to use less food from abroad.”