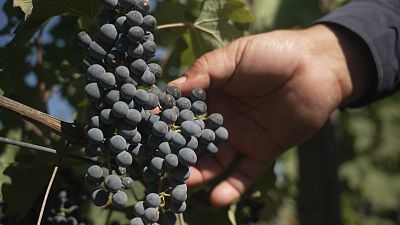 Azerbaijan has a rich tradition of winemaking and the city of Göygöl has the oldest operating winery in the country.

Contemporary winemaking started in Göygöl 1860 by German immigrants. There are over 500 hectares of vines in the Göygöl wine plant. It’s one of the most prominent estates in Azerbaijan.

Faiq Huseynov is an Agronomist, (an expert in the science of soil management and crop production) at the Xan Winery, “Before the Soviet era, in the 18th and 19th centuries over 200 varieties of grapes grew in Azerbaijan. During the Soviet period, viniculture was destroyed as part of the fight against alcoholism. Only 38 varieties survived.”

Today the winery grows fifteen varieties of grapes, most commonly from the Caucasus and Europe, including two surviving local varieties.

“They are Madrasa and Bayan Shira, and great wines come out of them. Bayan Shira is great for producing sparkling and dry wines”.

Once handpicked, the grapes are transferred to the main plant to be processed. Rasim Omarov is the Head Of Wine Production at the Xan Winery and meticulously checks the yield's quality. He has worked here as a chief winemaker for 32 years.

This year’s harvest has seen around 4,500 tons of white and red grapes passing through. They will turn into a wide range of wines for local and international consumption. The cellar is where the magic happens. “In this cellar, we have 152 small French oak barrels that are used for aging wine. We produce vodka, brandy, red and white wine, and sparkling wines.” Explains Rasim.

The company was founded by German settlers, the Fohrer and Hummel brothers. The huge barrels are now kept as a reminder of those times, as museum pieces.

“Each of the 19 oak barrels you see here can hold 8,000 litres. They were used to age and prepare wine for bottling.”

Rasim Omarov
Head Of Wine Production at the Xan Winery

German immigrants not only left a culture of wine in the region, but they even founded the city of Göygöl. Their legacy is clear, especially in the architecture of the town centre.

Rita Ibrahimova, is the Director of the History Museum, in Göygöl, “Germans arrived here from Koln in 1817. They settled in five streets and founded the city one year later. They named it Helenendorf at the time."

Before the German invasion of Russia in World War Two, the German community played a major role in the region's economic, social, and cultural life. Following the attack on the Soviet Union, Moscow issued a decree exiling Germans from the Caucasus in 1941.

“Viktor Klein lived in this house from 1935 till 2008. Like all Germans living here, Viktor Klein was a wine lover.”

Rita Ibrahimova
Director of the History Museum, in Göygöl

However, German resident Viktor Klein avoided being deported, and remained with his mother, because his father was of Polish descent. He lived there all his life and in his will, he left his house to the German embassy in Baku. Today the Ministry for Culture and Tourism in Azerbaijan administers the house.

Evidence of Viktor's love of wine can be found in his house, which has a wine cellar, a grape-pressing machine, (inherited from Viktor's grandfather, who brought it from Tbilisi), and tools that are testimonies of a long-standing family tradition.