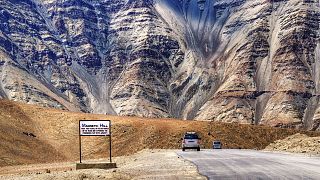 Ever had your car roll uphill?

It sounds impossible - but at several “magic hills” scattered around the world, it’s exactly what happens. Or so it seems.

Go for a drive on one of these roads and you might feel like pulling over to check your eyesight.

But don’t worry: you don’t have to surrender your driver’s licence just yet. You’re merely experiencing a unique optical illusion.

Here’s how it works - and where to go to find one.

‘Magic hills’ - also known as gravity or magnetic hills - can be found all over the world.

One famous example is the Magic Hill in the Mourne Mountains in County Down, Northern Ireland, next to the Spelga dam.

Such roads can also be found across the border in Ireland - behind Ben Bulben in County Sligo, and near the Mahon Falls in the Comeragh mountains.

Travellers to Italy can find the ‘anti-gravity hill’ - a short patch of road near Rome.

Greece, Germany, Portugal, Romania, the Czech Republic and Scotland all boast examples of the mysterious phenomenon.

Outside of Europe, magical hills abound. There are four in Australia, two in Brazil, ten in Canada and 27 in the United States. A full list can be found here.

Most of the hills are well-populated with curious travellers.

To experience the gravity-defying effect, drive your car to the bottom of the hill and put it in neutral. It will roll back up the slope - so remember to check out your rear-view window!

Non-drivers can pour some water onto the ground and it will appear to flow uphill.

How do magic hills work?

The real explanation is a bit less fantastical.

Each spot is surrounded by 360 degree views of hills. It feels like you are facing uphill, when you are actually facing downhill.

“The embankment is sloped in a way that gives you the effect that you are going uphill,” materials physicist Brock Weiss from Pennsylvania State University told Discoveries and Breakthroughs in Science back in 2006.

“You are, indeed, going downhill, even though your brain gives you the impression that you're going uphill.”

While they may not defy gravity, these magical phenomena will certainly defy your expectations!