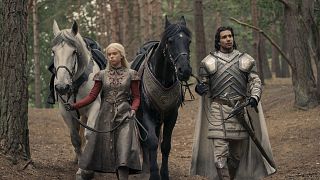 After just three episodes, House of the Dragon - HBO’s prequel to Game of Thrones - is causing an unusual spike in search traffic.

A complete tour of filming locations for the popular series would bring you on a long, adventurous journey across the likes of Northern Ireland, Croatia, Malta, Morocco, Spain and Iceland. The bulk of filming for House of the Dragon, however, was done in the UK - which makes for a much easier, cheaper trip altogether.

The spectacular landscapes of Cornwall - a popular summer holiday hotspot in the UK -, the Peak District and Hampshire serve as backdrops to all the drama.

But if you’re hoping to chase the last rays of summer sun while retracing the steps of the House of the Dragon’s cast you’ll be happy to know a few key scenes were also filmed in Spain and Portugal.

In the UK, fans are flocking to Cornwall in southwestern England.

Entertainment experts at Irish casino Slotbox.com counted the number of photos shared on social media at the filming locations featured in the show.

Other locations in Cornwall include the St Michael’s Mount, a 12th century building sitting on the tidal island of St Michael. In House of the Dragon, this becomes the stronghold of House Velaryon, an old and proud house with old Valyria blood in its veins and a grudge against the Targaryens.

The dramatic-looking location has already been home to the most famous vampire in movie and literary history. It features in the 1979 adaptation of the film “Dracula” with Frank Langella and Laurence Olivier.

The tidal beach of Kynance Cove, known for its turquoise waters and white sand, has featured in the show as the backdrop to the Valyrian camp.

Retrace the footsteps of Prince Daemon Targaryen in Derbyshire, UK

In 2021, Smith, who plays Prince Daemon Targaryen, was spotted filming in the Peak District in Derbyshire, England, an area known for its green valleys and hills.

Filming locations in this region are known to include Cave Dale, Eldon Hill Quarry and the Market Place in the village of Castleton.

See the site of the Targaryen camp in Hampshire, UK

Caesar's Camp is a hill fort straddling the border of the counties of Surrey and Hampshire. In September 2021, a large set was put up at the site in Aldershot. Built within the trees it appeared to be a camp set up by the characters on the show.

One image shared on social media of the filming showed the Targaryen sigil banner outside one of the tents.

Not all locations are ‘real’: there’s quite a bit of CGI involved in the making of House of the Dragon.

Game of Thrones fans will be already familiar with the Spanish mediaeval town of Cácares. In the original show, it stood in for the stronghold of the Lannister family, King’s Landing.

The town is a UNESCO World Heritage Site which features a unique blending of Roman, Islamic, Northern Gothic and Italian Renaissance architecture.

With their ancient stone walls, cobblestone streets and historic buildings, there’s plenty to see in these towns.

Stay in the city of stone in Monsanto, Portugal

Filming also took place in the picturesque village of Monsanto, which was awarded the title of ‘the most Portuguese village in Portugal’.

Monsanto, which is quite close to Cácares, is known as the City of Stone for the way its architecture blends in with the rocky landscape surrounding it.

With its cobblestone streets and majestic castle sitting at the top of the village, Monsanto makes for a great holiday spot that has plenty of picture-perfect locations - with or without dragons and platinum blonde wigs.