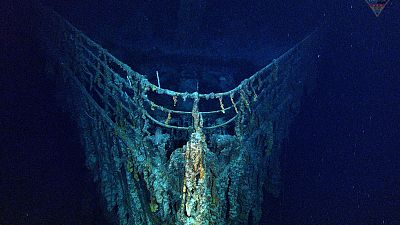 More than 100 years since the Titanic sank - and a quarter of a decade since Leo and Kate immortalised its ill-fated journey on film - the ship has a huge place in the popular imagination.

So it’s strange to think of the real vessel, slowly decaying 3,800 metres down at the bottom of the Atlantic, 400 nautical miles off the coast of Canada.

The Titanic is still with us, or at least with whatever dwells in the abyssal plane. And if you want to pay it a visit - and have €250,000 spare - then you can do so.

‘First of its kind’ footage shows Titanic in astonishing detail

New video footage from this year’s expedition captures the wreck in 8k detail, giving the best insight yet into what awaits crew members.

“The amazing detail in the 8k footage will help our team of scientists and maritime archaeologists characterise the decay of the Titanic more precisely as we capture new footage in 2023 and beyond,” says OceanGate Expeditions president Stockton Rush.

New details have come to light, such as the name of the anchor maker (Noah Hingley & Sons Ltd), which was previously indecipherable on the portside anchor.

“I’ve been studying the wreck for decades and have completed multiple dives, and I can't recall seeing any other image showing this level of detail,” remarks veteran Titanic diver Rory Golden.

“It is exciting that, after so many years, we may have discovered a new detail that wasn’t as obvious with previous generations of camera technologies.”

The mighty ship’s bow, part of its hull, cargo hold, an enormous anchor chain (each link weighing almost 91kg) and collapsed railings have all been caught in high definition.

The new footage will also help support identification of species observed on and around the Titanic.

What does a Titanic expedition involve?

Fewer than 250 people have personally viewed the Titanic and surrounding debris field since the wreck was discovered, according to OceanGate.

That puts ‘mission specialists’ - as the company refers to its crew, rather than mere tourists or passengers - in a very privileged cohort. You’ll need to be 18 years of age with some strong sea legs; able to board small vessels, climb ladders and carry weights.

Stockton worked with NASA to design the world’s only deep-diving submersible (a small underwater craft) capable of reaching Titanic depths with five crew members aboard.

If chosen, you’ll embark on an eight-day mission with dives on the Titan submersible - apparently named not after the famous boat but the watery moon of Saturn.

The expeditions are part of a “multi-year longitudinal study of the Titanic and its unique biodiverse ecosystem,” adds OceanGate.

While the Titanic is undoubtedly the company’s flagship expedition, it also organises deep dives in the Great Bahama Bank and the mysterious Hudson Canyon - likened to the Grand Canyon underwater.