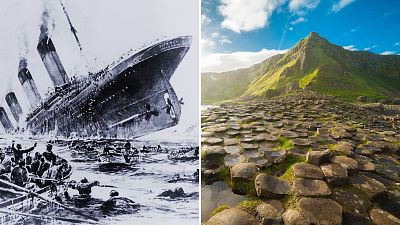 Despite being located at either end of the island of Ireland, the ports of Belfast and Cork (Cobh) are connected by one of the world’s most infamous shipping disasters.

Told many times in books, theatre performances and movies, the story of the Titanic is one that is indelibly etched in people’s minds. However the story can really only be understood once you have visited the places the Titanic was created.

Belfast was the birthplace of the vessel and Cork (Cobh) its final port call before sailing towards the open ocean.

Belfast was already a ship-building powerhouse by 1909, when White Star Line appointed Harland and Wolff to build the vessel, in fact before being formally named, the ship was known as “number 401”. The Titanic was planned to be one the biggest and most opulent ships ever seen and deemed as unsinkable.

Some of the world’s richest and most influential people would go on to dine on 11-course meals and stroll along the decks before enjoying a Turkish Bath.

First class cabins would be the last word in luxury and would go on to attract politicians, businessmen, bankers. Some of the world’s richest and most influential people would go on to dine on 11-course meals in the stylish restaurant or Parisian café and stroll along the promenade decks before enjoying a Turkish Bath.

On the opposite end of the passenger list, third class passengers were mainly immigrants heading for a new life in America, who had to eat much more meagrely and share facilities with others.

Visit the home of the Titanic

The Titanic Centre in Belfast is one of the island’s most popular attractions. Located next to the Titanic slipways and the former shipyard Drawing Offices, the centre is at the heart of where the Titanic was planned, designed, built and launched.

Visitors are able to gain in-depth knowledge about the liner and get an understanding of the scale of the vessel from vantage points alongside and above the docks. It took Belfast a long time to come to terms with the Titanic’s fate, indeed, the Titanic Centre was opened to mark the centenary of the sinking.

This was due to a mixture of shame and embarrassment surrounding the claim that the ship was “unsinkable”, when catastrophe struck. For a long time, the city’s tour guides quipped “she was alright when she left here” but ultimately, it was realised that other cities around the world such as Halifax , Nova Scotia and Orlando, Florida were telling the Titanic story, through exhibitions and events, that could really only be told properly in Belfast.

The planned, but ultimately ill-fated, maiden voyage was a much-trumpeted affair, leaving from Southampton and calling at Cherbourg and Cork (Cobh) before making the trans-atlantic crossing to New York.

The last port of call before America

As a major transatlantic port, 2.5 million Irish people used the port of Cobh to emigrate to North America between 1848 and 1950. The intended passengers gathered at the White Star Line offices, on the harbourside in Cobh on 11th April 1912, would have been making the journey for a variety of reasons.

Visitors are given a ticket with the name of one of those passengers in order to follow in their footsteps through the building and ultimately learn their fate.

The exhibition shows recreations of first and third class cabins and houses some interesting artefacts and tells the story of some of those onboard. Today visitors follow the exact route the passengers took as they checked in for their journey. The village of Cobh is much the same as it was in 1912, the colourful buildings are overlooked by the majestic St Colmans Cathedral, which was nearing completion around that time.

The many hotels surrounding the harbour were used for “American wakes” where friends and family gathered to commemorate the loss of a loved one while also celebrating their achievements in life and looking forward to their new life in America.

The Rob Roy Inn, opposite the White Star Line office, is one such place, which also became a focal point as news of the Titanic tragedy emerged.

Where to stay in Belfast

Travel between Belfast and Cork is relatively simple nowadays, which makes a Titanic long weekend an appealing possibility.

The cities are 260 miles apart but are connected by an excellent “traffic light free” motorway system, which bypasses all the towns and villages along the way. Cork’s Metropole Hotel which was already well established by the time Titanic called at the city’s harbour, perhaps inadvertently offers guests the experience of the finer things in life; impeccable service, rich food and timeless elegance, just like the ship.

In Belfast, the Fitzwilliam Hotel offers luxurious rooms with views across the city centre. The famous City Hall, which has a Titanic memorial, and the iconic cranes of the Harland and Wolff shipyard are within your eyeline as you take in the views of the city.