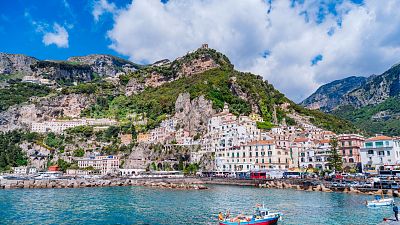 Italy’s Amalfi Coast is known for its azure seas, lofty cliffs and candy-coloured villas - but also for the horror traffic that plagues its narrow roads.

Now the popular destination is imposing new rules to halve this dangerous traffic.

Often single-lane and filled with sharp turns, the winding thoroughfare is usually clogged by tourists searching for the perfect view.

But kilometres-long queues may soon be a thing of the past, after the region introduced new rules on Wednesday.

Here’s what it means for tourists visiting the stunning coastal area.

What are the new Amalfi Coast driving rules?

The new rules will apply to the famous 35 kilometre stretch between Vietri sul Mare and Positano.

During peak hours in peak season, drivers will have to obey a new alternate number plate system.

The system is modelled of the Pico y placa regulations in place in several congested Colombian cities.

The Amalfi regulations will apply from 10am to 6pm on weekends from mid-June through to the end of September 2022.

They will apply for all of August, and on Easter Holy Week holiday. Public buses, and taxis are exempt, as are residents of the 13 towns on the stretch of road.

Anas - the authority which manages the roads - has also completely banned vehicles over 10.36 metres long. Caravans and vehicles with trailers will only be able to use the road between midnight and 6:30am.

How will the new driving rules impact your holiday?

Guides to driving the picturesque stretch of road all warn of long queues and limited parking.

The new rules aim to cut down the time that both locals and tourists spend in agonising traffic jams.

Visitors are being welcomed by local businesses in the area, like B&B Vietri Centro owner Fausto Salsano.

"Obviously we'll lose clients, but it's for the good of the towns. If you don't restrict traffic, the roads get blocked and you can't find parking. There's no other option,” he told CNN.

However, not everyone is happy. Antonio Ilardi, the president of Federalberghi Salerno, a local association of hoteliers, has warned that the rules could prevent overnight tourists from reaching their hotels.

The Amalfi coast is the latest in a long line of tourism hotspots imposing restrictions on visitors. Venice is set to double its daily peak season tourism tax to €10 next year, having previously banned large cruise ships from docking in the port.

Barcelona recently increased its tourism levy, while New Zealand is mulling over curbing visitor numbers to its most popular destinations.