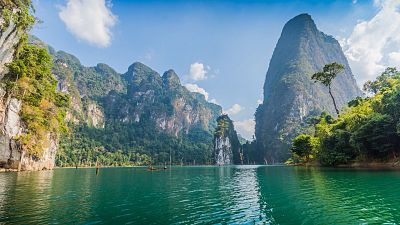 As the COVID-19 pandemic continues, the travel sector is fighting to revive itself in the face of restrictions and closures. Countries that have relied heavily on tourism in the past are particularly struggling.

As a result, some have resorted to implementing an upcoming “tourist tax” in 2022.

But many places already have tourist taxes in place and if you've travelled abroad, you've likely paid one before. You may have never noticed it - as it’s sometimes worked into airline tickets or the taxes you pay at your hotel.

We’ve done all the research for you so here is everything you need to know about the countries you have to pay to enter.

Thailand introduces a tourist fee in 2022

Thailand is reportedly introducing a tourist fee of 300 Baht (€8) from April onwards.

The governor of the Tourism Authority of Thailand told Reuters that part of the fee will “be used to take care of tourists” as there have been times when health insurance didn’t cover them.

It will also help finance further developments of tourist attractions, such as the Grand Palace in Bangkok.

Venice will introduce a tourist fee in 2022

Italian newspaper La Stampa reported in August that several measures have been proposed to control tourist numbers, such as an online booking system. But more efforts must be in place to curb numbers - including a fee to enter the city.

The proposed levy would vary between €3 and €10, based on whether it’s low or high season.

EU implements a tourist tax in 2022

By the end of 2022, non-EU citizens, including Americans, Australians, Brits and other travellers from outside the Schengen zone, will need to fill out a €7 application to get in.

Many countries already have a tourist fee in place, for a variety of reasons.

For some, it’s to do with trying to curb the number of tourists and to prevent overtourism.

For others it’s almost like a sustainability tax on each visitor. The money from these taxes goes towards maintaining tourism facilities and protecting natural resources.

In Austria you pay an overnight accommodation tax, which varies depending on which province you’re in. In Vienna or Salzburg, you'll pay an extra 3.02 per cent on the hotel bill per person.

The tourism levy is also known as Tourismusgesetz and Berherbergungsbeiträge.

The tourist tax in Belgium is also applied to accommodation, for every night you stay there.

The fee is sometimes included in the room rate of the hotel but some separate the cost out and make it a supplemental charge, so you need to check your bill carefully.

Antwerp and Bruges charge a rate per room. The rate in Brussels varies depending on the hotel's size and rating.

While most countries’ tourist fees are below around €20, Bhutan’s tax is sky high in comparison.

The minimum daily fee for most foreigners is: $250 (€228) per person per day during high season and slightly less in low season.

But it covers a lot, including accommodation, transportation in the country, a guide, food, and entry fees.

It’s very low and varies depending on area and hotel classification - up to around €1.50.

Most Caribbean islands have tourist taxes added to the hotel cost or a departure fee.

Antigua and Barbuda, Aruba, the Bahamas, Barbados, Bermuda, Bonaire, the British Virgin Islands, the Cayman Islands, Dominica, the Dominican Republic, Grenada, Haiti, Jamaica, Montserrat, St. Kitts and Nevis, St. Lucia, St. Maarten, St. Vincent and the Grenadines, Trinidad and Tobago, and the US Virgin Islands all have some form of fee for visitors.

Fees range from €13 in the Bahamas to €45 in Antigua and Barbuda.

Croatia raised their tourist tax in 2019. The increased rate only applies during peak season in the summer though.

You only need to pay a tourist fee in the Czech Republic when visiting the capital city, Prague.

It is very small (under €1) and paid per person, per night, up to 60 nights. The tax does not apply to children under 18.

There is a “taxe de séjour” to pay in France. It is added to your hotel bill and varies depending on which city you are in.

Tourist hotspots like Paris and Lyon use the money to maintain tourism infrastructure.

Germany has what they call a "culture tax" (a kulturförderabgabe), and also a "bed tax” (a bettensteuer), in cities such as Frankfurt, Hamburg, and Berlin.

The fee is around 5 per cent of your hotel bill.

The tourist tax in Greece is based on the number of hotel stars or number of rooms you're renting. It can be anything up to €4 per room.

It was introduced by the Greek Ministry of Tourism to help cut the country's debt.

Tourist fees in Hungary only apply in Budapest.

Travellers have to pay an extra 4 per cent every night based on the price of their room.

Tourist taxes in Indonesia only apply in Bali.

In 2019, a new law states that overseas visitors to the Indonesian island must pay a fee in the region of €9.

Revenue from the tax reportedly goes towards programmes that help to preserve the environment and Balinese culture.

Tourist taxes in Italy depend on where you are. Venice may introduce its own tax in the summer of 2022.

Meanwhile, Rome's fee ranges from €3 to €7 per night depending on the type of room, but some smaller cities charge more.

In Japan it comes in the form of a departure tax. Visitors to Japan pay 1,000 yen (around €8) as they leave the country.

The official tourism website claims this small tax makes “a significant difference” to the economy.

Malaysia’s tourist tax is a flat rate and applied per night you stay.

It’s not much more than around €4 a night.

Many tourists, people on working holidays, and some students and workers coming to New Zealand must pay an International Visitor Conservation and Tourism Levy (IVL) when they arrive.

But people from Australia are exempt.

In Amsterdam, this amounts to 7 per cent of the cost of a hotel room. It’s called toeristenbelasting.

Portugal's low tourist tax is paid per night per person and is only applicable to guests who are 13 and over. It’s around €2.

You only have to pay it on the first seven days of your stay.

The tourist tax in Slovenia varies based on location and hotel rating.

It’s slightly higher in larger cities and resort towns, including Ljubljana and Bled - around €3.

If you're heading to Ibiza or Majorca, you'll have to pay a tourist tax.

The Sustainable Tourist Tax, which applies to holiday accommodation on Spain’s Balearic Islands (Mallorca, Menorca, Ibiza, Formentera), also applies to each holidaymaker aged 16 or over.

During the high season, the tax can reach up to €4 per night.

The tourist tax in Switzerland varies depending on the location. The cost is per night and per person and is around €2.20.

Quotes for accommodation usually do not include the tourist tax - it is specified as a separate amount, so it’s easier to keep track of.

And it only applies to stays under 40 days.

A hotel tax or lodging tax for travellers renting accommodation is charged in most of the United States. It’s also called an occupancy tax.

The fees apply at hotels, motels and inns. The highest rate is reportedly paid in Houston, with a 17 per cent tax on your hotel bill.