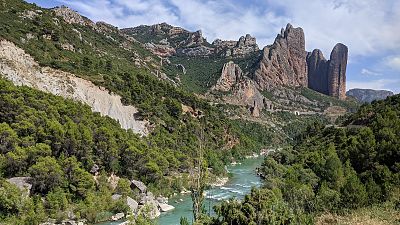 Often when people find out where I’m from they say in their best Spanish "vamos a la playa" ("let’s go to the beach"). I know it’s meant with good intentions but it always catches me off guard, because it says little about my experience of Spain.

For me, Spain is the mosaic of yellow, brown, and red lands that I see from the plane before landing in Madrid. It's eating just the right amount at lunch so you leave space for dinner. It's going from bar to bar devouring my favourite tapas then taking a 'siesta' without feeling the least bit guilty.

I am a Spanish journalist with Euronews and I’m going to share my tips on how to explore my beautiful home country as if you aren’t a tourist.

Madrid: One of the most touristy destinations is also one of the best places to experience the country like a local: from buzzing tapas nights to chilly Sunday mornings exploring El Rastro flea market, the Retiro Park, or the Prado museum.

Toledo or Segovia: Plan a day trip from Madrid to the historic city of Toledo. In the 10th century, its streets were a melting pot of cultures: Christians, Arabs, and Jews lived here alongside each other. If you want to get off the beaten track head north to Segovia instead. Its medieval castle inspired Walt Disney and its aqueduct is a masterpiece of Roman engineering.

La Alhambra in Granada & Cordoba’s Mezquita: In Spain, we use the word "ojalá" to say "hopefully". It comes from the Arabic "Inshallah" (God willing). Spain was ruled by the Moors for eight centuries (from 711-1492). Visiting these two jewels of Moorish architectural heritage is the best way to immerse yourself in this part of history.

Seville: Enjoy a flamenco show in Triana, visit the monumental Plaza de España in a horse-drawn carriage or discover the vestiges of Moorish culture in the Real Alcázar. Seville has everything you'd expect from Spain without disappointing the offbeat traveller.

Cadaqués: The surrealist painter Salvador Dalí said this Mediterranean village was “the most beautiful in the world” and built his house at its easternmost tip to be the first Spaniard to see the sunrise every morning (it’s now a must-see museum).

The Fallas of Valencia (March 15-19): It is probably one of the most jaw-dropping festivals you could ever witness - also one of the loudest. In the days leading up to the celebration, the streets of Valencia get packed with gigantic sculptures depicting well-known controversial figures (particularly politicians). Don't get attached to them. They burn them. Get ready for huge bonfires, firecrackers, and other pyrotechnics in the very centre of the city.

La Rioja: The most international Spanish red wine is named after this region. Its wineries are scattered among a landscape of warm, reddish-leafed hills of vineyards and monumental villages visited by Christian pilgrims. For its gastronomy, a stop in the city of Logroño is a must.

Barcelona: I know it's full of tourists but there's a reason: visiting the Sagrada Familia before it's finished one day is on most tourists’ bucket list. Top tip: don't eat paella at the Ramblas, try butifarra sausage instead.

Ibiza: Spain's hippy island has two faces: one offers a vibrant nightlife to party-goers and the other has breathtaking coves, natural parks, and boat trips for early risers. The latter will particularly enjoy a hop over to the unspoiled island of Formentera.

The Cantabrian coast: From the Comb of the Wind sculpture (El Peine del Viento) in the Basque city of San Sebastian to Finisterre (or literally "the end of the earth") at the westernmost tip of Spain, there are more than 800 kilometres of rocky cliffs, long sandy beaches, elegant towns, fishing villages and plenty of delicious seafood.

Essential places that you won’t find in any guidebook

Let me introduce you to my region, Castile and León. Its name comes from its more than 400 castles. Its streets have witnessed emblematic episodes of Spanish history such as the marriage of the Catholic monarchs and the death of Christopher Colombus.

To kick off your time here, I suggest a tour around the 22,000 hectares of vineyards where Ribera de Duero wines are produced. They are mostly reds. In local restaurants, they are served with meats, sheep cheeses, and bread with a crispy crust and delicate crumbs. The traditional dish is roast lamb (lechazo).

Forget the beach and spend a week in Extremadura

There are many reasons to start a trip to Spain in the region of Extremadura. The main reason is that it is still largely unknown to international tourists.

Located to the west of Madrid, on the border with Portugal, it is one of the places where you can eat the best jamón ibérico (Iberian ham) in the country. The pigs roam its holm oak pastures eating acorns off the ground.

In the north, there is a wide range of options for hiking such as the Monfragüe Natural Park, Sierra de Gata mountains, and the Jerte valley where it is possible to see the cherry blossom in spring. In place of a beach, there are natural pools amongst the rocks.

The cities offer different architectural views of the history of Spain. Cáceres is medieval, Mérida is Roman and Badajoz is Moorish.

Witchcraft in the Valley of Baztán

Located in the north of Spain, a few kilometres from the border with France, this valley of lush green forests is known for its legends about witches.

The most famous episode of witchcraft in Spanish history took place in the village of Zugarramurdi. In 1610, the Inquisition arrested 53 of its inhabitants for organising akelarres, a Basque word that means "farmlands" but is used to refer to a gathering of people performing rituals, casting spells, or invoking the devil. Most died in prison; 11 were burned at the stake.

They are commemorated in the Witches' Museum and the Witches' cave, a 120-metre long natural tunnel excavated by the Orabidea river. Both sites evoke the mythology and esotericism of a pre-Christian culture that had to go into hiding to resist persecution.

There is nothing more local than getting up on a Sunday morning and heading to Madrid's most famous flea market. You’ll be joining crowds of other tourists (and locals) but it’s a great place to find everything from antiques, books, records, and funny souvenirs of Madrid.

It’s thought to have been around since the mid-18th century. It was originally planned around abattoirs and butcher's shops so some believe its name, the Rastro (the trail in Spanish), may refer to the trail of blood.

El Rastro is a stone's throw from the city's main attractions, such as Puerta del Sol, Plaza Mayor, and the Royal Palace, so you combine them all into one day.

It doesn't matter if you don’t walk the whole route and just do one stage. Whether you do it for religious reasons, to discover yourself, or just to go hiking, the important thing is that the Camino de Santiago is one of the best ways to discover Spain on foot.

This medieval pilgrimage can be completed via several routes. The most traditional follows an earlier Roman trade route, from the Pyrenees to the westernmost tip of Spain. But there are many other versions. The destination is always the same: the majestic Cathedral of Santiago de Compostela in Galicia.

It’s the perfect way to ‘slow travel’ rural Spain, meet fellow walkers from all over the world, and, of course, meet locals in the villages at the end of each stage.

At 3,718 metres high, the Teide volcano is the highest peak in Spain and the only subtropical mountain in Europe.

Located at the heart of the Canarian island of Tenerife, it offers a unique forest landscape. For example, here you can find the Mount Teide burgloss (tajinaste rojo in Spanish), an endemic flowering plant that grows at the foot of the volcano like little red gnome’s hats.

From the summit, known as "the roof of Spain," you can enjoy the spectacular volcanic landscape surrounded by the Atlantic Ocean.

There are two keys to enjoying Spanish food like a local:

1. Ask what the typical dish is where you’re visiting:

Spanish gastronomy is varied and it is best to trust the specialty of each region. If you eat paella in the most touristy streets of Madrid or Barcelona, the result may be disappointing - because it originates in Valencia. Cocido (a broth with meat, chickpeas, and vegetables) is Madrid's traditional dish. Gazpacho (a cold vegetable soup) is from Andalusia. The good news - tortilla de patatas (potato omelette) is from anywhere that prepares it well.

2. Ask around to find the best neighbourhood for tapas:

Going out for tapas in Spain is a way of life. You go with friends, stop in more than a bar, and take your time at each stop. Top tip: each bar has a tapa that is its specialty so make sure to order that one.

One of the most popular tapas is the croqueta, a portion of dough made with a minced mixture of various ingredients, breaded and deep-fried. It is so successful that it has its very own International Day (January 16). In Spain, saying "take the last croqueta" is (almost) a synonym of "I love you".

Lastly, keep in mind that restaurants in Spain open and close later than in the rest of Europe, both for lunch and dinner. Take advantage of these loose schedules to stretch out your days like any Spaniard on a weekend.

In some bars, you get a free portion of food (tapas) with each drink. These are usually very generous so be prepared to end up stuffed without having paid for food.

Madrid's must-see museums, such as El Prado or the Reina Sofía, have opening hours when it is possible to enter free of charge (check the schedules on their websites).

Some of the country's most well-known festivals are also free, for example running in Pamplona with the bulls during Hemingway's favourite festival, San Fermín.

For a quieter affair try The Courtyards Festival of Cordoba (Festival de los Patios Cordobeses) in May. Residents of this beautiful Andalusian city open the doors of their whitewashed and flower-decorated patios to visitors, with the most-voted for winning a prize.

When to visit Spain

If you’re looking for a break from the winters of Northern Europe, head to the south. The north is best visited from June until August. September and October are still lovely and warm but much quieter with tourists. The Canary Islands offer a spring-like climate all year round.

The best way to experience Spain

The larger cities are connected by a network of high-speed trains. You can get from Madrid to Barcelona or Seville in just three hours.

If you’re going to be travelling around more rural regions like Extremadura or the Cantabrian coast, it is advisable to rent a car.

My favorite option is carsharing. If you speak Spanish, it is a great way to meet locals and ask for advice about your destination.

Please note that there are currently travel restrictions in place due to COVID-19. Depending on which country you visit, restaurants, bars, and museums may be closed. Always check government advice before making any bookings.