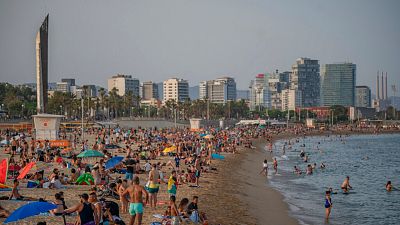 If you’ve ever lived in a popular tourist city like London or Paris, you’ll know just how much visitors can mess with your day.

Slow-moving tour groups hog the pavements, coaches block your road to work, the mess left behind by partygoers looking for an international night out. The sheer volume of badly behaved visitors can be overwhelming during the height of summer.

Not all tourists are a nuisance and we all know the many benefits they bring to local economies. But with travel opening up, visitors are flocking back and with them the impacts of overtourism. It’s not surprising, then, that the people who live in these famous locations aren’t so keen on their return.

Whether it’s because of long-standing issues or the health risks of an influx of visitors, here are some of the destinations discouraging badly behaved tourists.

Before the pandemic, an estimated 30 million people visited Barcelona every year, leaving the city at the heart of the overtourism debate. Local people couldn’t buy homes because they had all been bought for Airbnb rentals.

A temporary ban on renting out accommodation for less than 31 days was introduced in August 2020 and the moratorium has now been extended until the end of next month. It is giving the municipality the chance to put in place a plan that means tourist accommodation will be available, without forcing out locals.

New bus routes are being introduced to try and encourage visitors to spread throughout the city. It is hoped that it will prevent popular areas, such as the Basílica de la Sagrada Família, from being overwhelmed with tourists.

With pre-pandemic visitor numbers of around 20 million people every year in a city of just 261,905 people, overtourism has long been a problem in Venice. So much so that it nearly put this destination on UNESCO’s list of world heritage sites in danger.

Venice narrowly avoided this fate by banning cruise ships from sailing through its historic centre. With some weighing more than 81,000 tonnes these enormous vessels posed environmental and safety risks to the city.

Italian newspaper La Stampa reported that, as of next year, visitors to Venice may have to pay an entrance fee too. It could cost tourists between €3 and €10 depending on whether they come during high or low season.

The fee is mainly meant to target day tripper and cruise ship passengers who cause congestion on the city’s narrow streets and clog up its waterways.

Tourists have been asked to “stay away” from the UK county of Cornwall after a huge spike in COVID cases.

Malcolm Bell, head of Visit Cornwall, said that it had seen “too many occurrences of overcrowding” in popular destinations despite more than 300 beaches and other destinations that could host tourists. Unless visitors have a pre-booked break they are being asked not to visit the popular seaside holiday spot.

As well as UK tourists looking to avoid the hassle of a break abroad this year, the spike in infection numbers has in part been blamed on the Boardmasters surfing and music festival. Cornwall Council has linked almost 5,000 cases to the event which happened in Newquay earlier this month.

“Cannabis tourism” in Amsterdam could come to an end post-COVID with Mayor Femke Halsema pushing for a ban on the sale of marijuana products to tourists.

In a recent letter to the city council, Halsema said that she, alongside many local residents, was fed up with “the power of attraction of Amsterdam as a holiday resort for soft drug tourism”. In her mayoral campaign, she repeatedly stated that the cannabis trade has become “too big and overheated”.

Before the pandemic, coffee shops and the red light district attracted more than a million visitors every month. Cheap flights and holiday rentals have made it a popular destination for weekend trips but the masses of visitors cause trouble for residents. The growth of short-term accommodation has also led to a housing shortage for locals.

Residents in Hawai’i have begged tourists to stop visiting the archipelago after fully vaccinated US tourists were invited to skip quarantine and pre-flight testing in July.

On the first three days after travel restrictions were relaxed, the US state saw the arrival of more than 100,000 tourists. It led to a shortage of hospitality workers, congested roads and restaurant waiting times of more than 90 minutes.

People living on Maui were left dismayed when the influx led to a water shortage. They faced fines of $500 (€426) for washing their cars, watering their lawns, and a list of other “non-essential” water-related activities.

Residents took to social media to say they were being treated like “second class citizens” and Mayor Mike Victorino went as far as to ask airlines to reduce the number of flights arriving in Hawai’i.

Visit these historical European towns for a magical fairytale escape