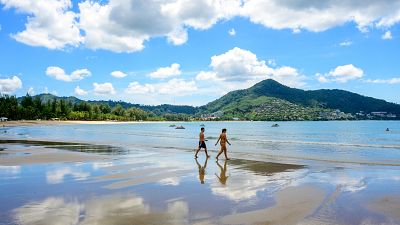 Tourists walk on a beach on the Thai island of Phuket on November 1, 2021, as Thailand welcomes the first group of tourists fully vaccinated against the Covid-19 coronavirus.   -   Copyright  MLADEN ANTONOV/AFP or licensors
By Euronews Travel  with AFP  •  Updated: 08/12/2021

Thailand’s strict COVID measures meant international travel has ground to a halt during the pandemic. But now, with tourism set to start up once again, the country is not sure it wants the same type of visitors to return to its shores.

Historically the country has attracted a huge number of tourists, from unruly gap year backpackers to large tour groups who show little care for the environment.

Now Thailand wants to move on from its ‘hedonistic’ history of mass tourism, with Tourism Minister Phiphat Ratchakitprakarn stating the focus should be on "high-end travellers, rather than a large number of visitors.”

One location that would be glad to see change is the Phi Phi islands, world-renowned for their white beaches and clear blue waters. While lockdowns kept international travellers away, this region was quietly recovering from years of overtourism.

Before the pandemic, Phi Phi National Park saw more than 2 million visitors every year with 6,000 people a day making the trip to the world-famous Maya Bay. This uncontrolled mass tourism left the region’s delicate ecosystem in disarray.

“The coral cover has decreased by more than 60 per cent in just over 10 years,” Thon Thamrongnawasawat of Kasetsart University in Bangkok tells AFP.

The problem got so bad that in 2018, Thon pushed authorities to close part of Maya Bay. It has been closed ever since and, with strict travel restrictions meaning visitor numbers in the region dwindled to almost zero, nature has started to recover.

Endangered whale sharks have been seen off the coast, turtle species have returned and more than 40 per cent of the coral fragments replanted in Maya Bay have survived.

Thon calls it “a very satisfactory figure obtained thanks to the absence of visitors.”

To make a full recovery though, these coral reefs would need another two decades without visitors.

There are still many people in Thailand who rely on tourism as a source of income, however, and now the Thai government is hoping to reignite the industry with a focus on a more sustainable kind of visitor.

In the wake of the pandemic, it is preparing to launch a long term residence programme that targets four types of people. Visas, tax incentives and relaxed property ownership rules are intended to attract professionals looking to work from the country, alongside highly skilled people, wealthy global citizens and retirees.

To attract ‘quality’ visitors, the government is also relaxing regulations around yachting and is revisiting taxes on personal belongings and luxury goods.

Governor of the Tourism Authority of Thailand Yuthasak Supasorn has said that in order for the country's tourism sector to be sustainable in the future, it needs to attract high-value travellers.

Phi Phi is also hoping to change its tourism reputation and National Park chief Pramote Kaewnam insists the same mistakes will not be repeated.

Boats will no longer be allowed to enter Maya Bay, instead they will be redirected to a pier away from the famous cove on the other side of the island. Only eight watercraft will be able to dock, with visitor numbers limited to 300 people at a time. Tourists will only be allowed an hour-long visit.

Designated areas for water activities are also being set up to try and limit the impact on ocean life.

Across the country, the aim is quality rather than quantity as Thailand's tourism industry recovers from being closed for almost two years.

Formentera: Why you should visit the lesser-known Balearic island

Long-haul bookings are bouncing back, but why not look closer to home?

Madrid: Why the Spanish capital is a foodie's paradise