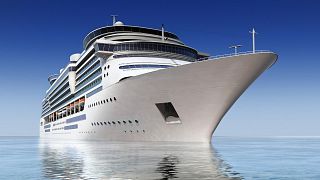 While a cruise around the Med or the Antarctic might seem like the height of all-inclusive luxury, you may not feel it’s worth the negative impacts after you read this.

New research reveals that passengers on a seven-day voyage around the Antarctic can produce as much CO2 as the average European does in an entire year.

And that’s not all. The study also found that a large cruiseliner can have a bigger carbon footprint than 12,000 cars, while an overnight stay onboard uses 12 times more energy than a stay in a hotel.

The study also found that a large cruiseliner can have a bigger carbon footprint than 12,000 cars, while an overnight stay onboard uses 12 times more energy than a stay in a hotel.

“For decades, the cruise industry’s business practises have threatened coastal and marine ecosystems and the climate, and risked the public health of coastal communities, passengers and crew,” says Marcie Keever, Ocean and Vessels Program Director at Friends of the Earth US.

Cruising isn’t just affecting the environment either. The authors of the study, Josep Lloret, Arnau Carreño Hrvoje Carić, Joan San and Lora E. Fleming found that the industry also impacts human health, with those who live near ports affected by noise and air pollution.

Boat and shipyard staff also have to live with difficult working environments and the risk of injury.

Which cruise company has the worst environmental record?

According to Friends of the Earth, there is a clear worst offender when it comes to environmental crimes.

The probation period began in 2017 after it was made to pay a $40 million (€35 million) fine for illegally dumping oil at sea and then hiding it from regulators.

In 2016 the company pleaded guilty to falsifying its records on a regular basis, in order to hide illegal discharges from US authorities for eight years. The corporation has also been fined heavily for dumping plastic into the ocean and exceeding limits on air pollution quotas too.

In contrast, they were made to pay just $250 in 2018 for dumping greywater in Glacier Bay National Park.

The environmental cost of cruises

Before the COVID-19 pandemic, the cruise industry was one of the fastest growing travel sectors, with passenger numbers rising steadily year-on-year. Even though cruise ships make up only a small fraction of the global shipping industry, their impact is huge.

The paper, “​​Environmental and Human Health Impacts of Cruise Tourism: a Review”, published in the Marine Pollution Bulletin, estimates that 24 per cent of all waste produced by shipping comes from the cruise sector. A cruiseliner carrying 27,000 passengers produces more than a tonne of rubbish every day.

A cruiseliner carrying 27,000 passengers produces more than a tonne of rubbish every day.

Much of this rubbish is incinerated and disposed of at sea, putting countless sea creatures and marine life at risk. The report talks about illegal waste dumping too.

The authors of the study, Josep Lloret, Arnau Carreño Hrvoje Carić, Joan San and Lora E. Fleming found that the industry also impacts human health, with those who live near ports affected by noise and air pollution.

Boat and shipyard staff also have to live with difficult working environments and the risk of injury.

Which cruise companies are the worst offenders?

For the last two years Friends of the Earth have been collating data on the worst offenders in the cruise industry, grading each on a number of different topics, including sewage treatment, air pollution reduction, transparency and any criminal violations.

In the sewage treatment category, which looks at whether sewage and greywater treatment systems are used or if sewage is dumped directly into the oceans, none of the companies scored above a C grade.

Of the 18 cruise lines listed, 10 of them - including P&O Cruises, Princess, Cunard and Costa - received an F, the worst grade possible.

Of the 18 cruise lines listed, 10 of them - including P&O Cruises, Princess, Cunard and Costa - received an F, the worst grade possible.

The eight cruise companies with criminal violations for a variety of illegal acts - such as dumping sewage and oil at at sea - are all owned by Carnival Corporation.

“Most governments refuse to enact strong regulations for the cruise industry, ignore the ongoing industry damage to communities and the environment, or cave under industry pressure.” says Marcie Keever from Friends of the Earth US.

Which cruise lines are improving?

Disney cruises came top of the Friends of the Earth report card with a B- overall. It received three A’s for air pollution reduction, water quality compliance, and transparency and a C for sewage treatment.

“Disney Cruise Lines is at the top of our report card, and would have received higher marks, but for the past two years we downgraded Disney for its push to build a massive cruise ship port at Lighthouse Point in the Bahamas,” says Keever.

“This development is opposed by community groups in the Bahamas for the destruction it would cause to the ecologically rich area that has received Marine Protected Area status.”

The company states that they have dedicated environmental officers on all of their ships and that they recycle more than 600 tonnes of metal, glass and plastic each year.

The only other cruise line to get above a D grade was Silversea Cruises, which was awarded a C, scoring highly in water quality compliance and transparency.

Is it easier to catch COVID-19 on a cruise?

The study also highlighted the role of cruise ships in spreading infectious diseases. This came to light at the beginning of the pandemic in 2020, when cruise ships such as the Diamond Princess became hotbeds for the virus.

A COVID-19 outbreak was first reported on the vessel in early February 2020 and ended up infecting more than 700 people in total, leading to 14 deaths. The ship was quarantined outside Japan for 27 days.

As a result, the cruise industry is having to adapt, with Disney Cruises now requiring all passengers - even the under-fives - to be fully vaccinated in order to join their cruises from mid-January 2022.

What can cruise lines do to be more environmentally friendly?

Cruise liners need to “be more transparent” according to Dr Hrvoje Carićm from the Institute for Tourism in Croatia and co-author of the study.

“Cruise corporations are not paying taxes in the EU and we believe they should be analysed more thoroughly from the perspective of the ‘polluter pays’ principle. Additionally, they do not have the same standards and pollution thresholds as land-based tourism and transport.”

Unlike hotels and resorts which, due to their permanency, have relationships with local communities, cruise lines do not have long-term commitments to their destinations.

Friends of the Earth also want the cruise ship industry to be more heavily regulated and have created a detailed plan they would like cruiseliners to commit to.

The plan includes a public commitment to zero emissions and to reducing speed below 12 knots within 25 miles of the coast. This would prevent ships from hitting whales and also eliminate sonic disturbance to marine wildlife and coastal areas.

Carićm believes some of the responsibility lies with the EU too.

“The EU should further the Emission Controlled Areas and demand cleaner fuels and ultimately decarbonise the sector.”